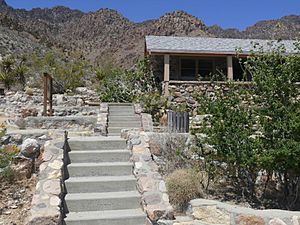 The habitat dramatically shifts with elevations above 4000 feet to a sky island where numerous animals and plants flourish in the added moisture caught by the mountains. The plant habitat includes forests of Single-leaf Pinyon (Pinus monophylla) and California Juniper (Juniperus californica), and remnant chaparral and woodlands with Oaks (Quercus turbinella) and Manzanita in these higher parts of the mountains.

Mitchell Caverns is home to two endemic species of insects found nowhere else.

The Providence Mountains State Recreation Area is located at the north-western end of Essex Road, off of Interstate 40 (the Needles Freeway). The visitor center is located in a historic 1934 stone dwelling. The campground is currently closed.

Providence Mountain Recreation Area was one of the 48 California State Parks proposed for closure in January 2008 by California's Governor Arnold Schwarzenegger as part of a deficit reduction program. It closed temporarily in January 2011.

Providence Mountains State Recreation Area and Mitchell Caverns reopened on November 3, 2017, after being closed for nearly seven years due to major infrastructure upgrades.

All content from Kiddle encyclopedia articles (including the article images and facts) can be freely used under Attribution-ShareAlike license, unless stated otherwise. Cite this article:
Providence Mountains State Recreation Area Facts for Kids. Kiddle Encyclopedia.