Ferocactus cylindraceus is a species of barrel cactus which is known by several common names, including California barrel cactus, Desert barrel cactus, and miner's compass. It was first described by George Engelmann in 1853.

This cactus is native to the eastern Mojave Desert and western Sonoran Desert Ecoregions in: Southern California, Nevada, Arizona, and Utah in the Southwestern United States; and Baja California, and Sonora state in Northwestern Mexico.

Ferocactus cylindraceus is usually cylindrical or spherical, with some older specimens forming columns 2 metres (6.6 ft) in height. It is covered in long, plentiful spines, which are straight and red when new and become curved and gray as they age.

The cactus bears flowers that are maroon outside, and bright yellow inside, with red or yellow centers on the side that faces the sun. The fleshy, hollow fruits are yellow. 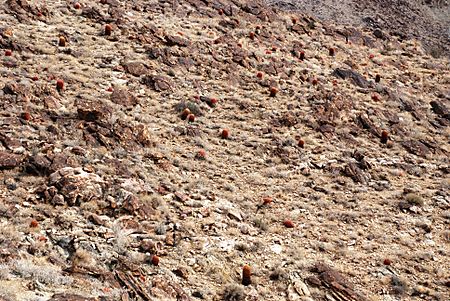 Hillside with many Ferocactus cylindraceus, in Joshua Tree National Park.

Having a sculptural form and picturesque qualities, this already uncommon cactus is threatened by plant collectors. It is also losing habitat to clearing for new wind farms and solar power plants in the Mojave Desert and Colorado Desert.

Protected areas with notable populations include

All content from Kiddle encyclopedia articles (including the article images and facts) can be freely used under Attribution-ShareAlike license, unless stated otherwise. Cite this article:
Ferocactus cylindraceus Facts for Kids. Kiddle Encyclopedia.