Prunus angustifolia, known commonly as Chickasaw plum, Cherokee plum, Florida sand plum, sandhill plum, or sand plum, is a North American species of plum-bearing tree. It was originally cultivated by Native Americans before the arrival of Europeans While Prunus is the classical name for European plums, angustifolia refers to its narrow leaves.

Chickasaw plum grows 12 to 20 ft (3.7 to 6.1 m) feet tall and 15 to 20 ft (4.6 to 6.1 m) wide in an irregular shape. It is "twiggy" in nature, and has a scaly, almost black bark. Its branches are reddish with thorn-like, small side branches. In February, March, April and May, small white flowers blossom, 0.3–0.4 in (8–10 mm) wide, along with red plums, up to 1 in (25 mm) long. The flowers have five white petals with reddish or orange anthers. The plums are cherry-like and tend to be quite tart until they fully ripen. They ripen in late summer. It requires low to medium amounts of water to grow, and dry, sandy or loose soil. It grows best in areas with regular sunlight or areas of partial shade. In sunny areas, it will be more dense and colonize thickly. In areas of partial shade, it will be thinner and less dense, and each plant will be more spread out. P. angustifolia is very difficult to distinguish from Prunus umbellata, with which it hybridizes easily. 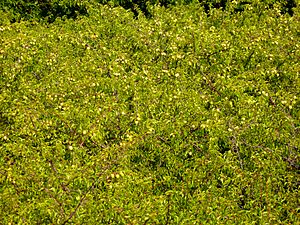 Prunus angustifolia is widespread across much of the eastern and central United States from Florida west as far as New Mexico and California, north to Nebraska, Illinois, and New Jersey, with a few isolated populations in northern Michigan. The species grows in dry and sandy soils, such as open woodlands, woodland edges, forest openings, savannahs, prairies, plains, meadows, pastures, and roadsides. It is listed by the USDA as an endangered species in the state of New Jersey.

Chickasaw plums tend to bloom early in the spring before many other plants bloom, and require very little maintenance; as a result, they are often used in ornamental horticulture. They are often found growing wild along highways, especially in the southern part of the United States. The fruit is eaten by various animals, and the foliage provides cover for nesting sites.

The 1/2 inch edible fruits change from red to yellow when fully ripe. They may be eaten raw and are often made into jellies. Because of its attractive bark, small leaves and thin branches, Chickasaw plum is also sometimes used for bonsai.

It is used by many species as a larval host, including the black-waved flannel moth, the blinded sphinx, the cecropia moth, the coral hairstreak, the elm sphinx, the hummingbird clearwing moth, the imperial moth, the Io moth, the polyphemus moth, the promethea silkmoth, the red-spotted purple, the small-eyed sphinx, the spring azure, the striped hairstreak, and the tiger swallowtail.They grow around Beaver County Oklahoma and Lipscomb county Texas

All content from Kiddle encyclopedia articles (including the article images and facts) can be freely used under Attribution-ShareAlike license, unless stated otherwise. Cite this article:
Prunus angustifolia Facts for Kids. Kiddle Encyclopedia.