At one time extinct in the wild, it has been reintroduced to its native habitat in Mongolia from stock in zoos. It is now in several nature reserves and national parks. As of 2002, the world population of these horses was about 1,000. 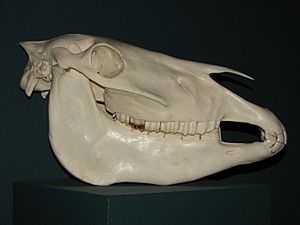 Skull, photographed at the Brno museum.

Przewalski's horse is stockily built in comparison to domesticated horses, with shorter legs. Typical height is about 12–14 hands (48–56 inches, 122–142 cm), length is about 2.1 m (6 ft 11 in). They weigh around 300 kilograms (660 lb). The coat is generally dun in color with pangaré features, varying from dark brown around the mane (which stands erect) to pale brown on the flanks and yellowish-white on the belly and around the muzzle. The legs of Przewalski's horse are often faintly striped, also typical of primitive markings. The tail is about 90 cm (35.43 in) long, with a longer dock and shorter hair than seen in domesticated horses.

The hooves of Przewalski's horse are longer in the back and have significantly thicker sole horns than feral horses. This is beneficial, as it improves the performance of the hooves.

The Przewalski's horse has 66 chromosomes, compared to 64 in all other horse species. 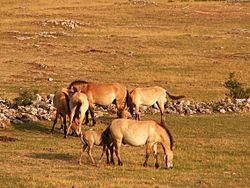 In the wild, Przewalski's horses live in small, permanent family groups consisting of one adult stallion, one to three mares, and their common offspring. Offspring stay in the family group until they are no longer dependent, usually at two or three years old. Bachelor stallions, and sometimes old stallions, join bachelor groups. Family groups can join together to form a herd that moves together.

The patterns of their daily lives exhibit horse behavior similar to that of feral horse herds. Stallions herd, drive, and defend all members of their family, while the mares often display leadership in the family. Stallions and mares stay with their preferred partners for years. While behavioral synchronization is high among mares, stallions other than the main harem stallion are generally less stable in this respect.

Home range in the wild is little studied, but estimated as 1.2-24 km2 in the Hustai National Park and 150-825 km2 in the Great Gobi B Strictly Protected Area.

Horses maintain visual contact with their family and herd at all times, and have a host of ways to communicate with one another, including vocalizations, scent marking, and a wide range of visual and tactile signals. Each kick, groom, tilt of the ear, or other contact with another horse is a means of communicating. This constant communication leads to complex social behaviors among Przewalski's horses.

Przewalski horse's diet consists mostly of vegetation. Many plant species are in a typical Przewalski's horse environment, including: Elymus repens, Carex spp., Fabaceae, and Asteraceae. While the horses eat a variety of different plant species, they tend to favor one species during a specific time of the year. In other words, Przewalski's horses have seasonal food preferences. In the springtime, they favor Elymus repens, Corynephorus canescens, Festuca valesiaca, and Chenopodium album. In early summer, they favor Dactylis glomerata and Trifolium, and in late summer, they gravitate towards E. repens and Vicia cracca. In winter, for example, the horses eat Salix spp., Pyrus communis, Malus sylvatica, Pinus sylvestris, Rosa spp., and Alnus spp. Additionally, Przewalski's horses may dig for Festuca spp., Bromus inermis, and E. repens that grow beneath the ice and snow. Their winter diet is very similar to the diet of domestic horses. In the wintertime, Przewalski's horses experience hypodermis, a condition in which one's metabolic rate slows down. They eat their food more slowly than they do during other times of the year. Looking at the species diet overall, however, Przewalski's horses most often eat E. repens, Trifolium pratense, Vicia cracca, Poa trivialis, Dactylis glomerata, and Bromus inermis.

Most "wild" horses today, such as the American mustang or the Australian brumby, are feral horses descended from domesticated animals which escaped and adapted to life in the wild. In contrast, Przewalski's horse has never been successfully domesticated, and remains a truly wild animal today.

Although Przewalski's horse can hybridize with domestic horses to produce fertile offspring, it has an extra pair of chromosomes.

According to ISIS, about 480 Przewalski's were reported in captivity.

All content from Kiddle encyclopedia articles (including the article images and facts) can be freely used under Attribution-ShareAlike license, unless stated otherwise. Cite this article:
Przewalski's horse Facts for Kids. Kiddle Encyclopedia.