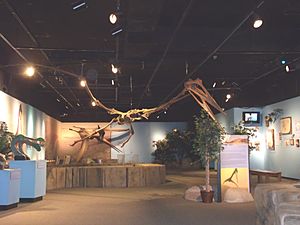 Pterodactyloidea is the suborder of short-tailed pterosaurs. Their fossil record starts in the late Jurassic. They became extinct in the K/T extinction event at the end of the Cretaceous period. Pterodactylus, Pteranodon and Quetzalcoatlus are in this suborder.

Recent work shows that the group had more variety at the end of the Cretaceous than was thought earlier. In the early 2010s, several new pterosaur taxa were discovered dating to the late Cretaceous. These finds include some small sized pterosaur species.

Pterodactyloidea is traditionally considered to be the group of short-tailed pterosaurs with long wrists (metacarpus), compared with the relatively long tails and short wrist bones of basal pterosaurs ("rhamphorhynchoids"). In 2004, Kevin Padian formally defined Pterodactyloidea as an apomorphy-based clade containing those species possessing a metacarpal at least 80% of the length of the humerus, homologous with that of Pterodactylus.

A subgroup of pterodactyloids, called the Lophocratia, was named by David Unwin in 2003. Unwin defined the group as the most recent common ancestor of Pterodaustro guinazui and Quetzalcoatlus northropi, and all its descendants. This group was named for the presence of a head crest in most known species, though this feature has since been found in more primitive pterosaurs and was probably an ancestral feature for all pterodactyloids.

There are competing theories of pterodactyloid phylogeny. Below is a cladogram showing the results of a phylogenetic analysis presented by Longrich, Martill, and Andres, 2018. This study found the two traditional groupings of ctenochasmatoids and kin as an early branching group, with all other pterodactyloids grouped into the Eupterodactyloidea.

Some studies based on a different type of analysis have found that this basic division into primitive (archaeopterodactyloid) and advanced (eupterodactyloid) species may not be correct. Beginning in 2014, Steven Vidovic and David Martill constructed an analysis in which several pterosaurs traditionally thought of as archaeopterodactyloids closely related to the ctenochasmatoids may have been more closely related to ornithocheiroids, or in some cases, fall outside both groups. The results of their updated 2017 analysis are shown below.

All content from Kiddle encyclopedia articles (including the article images and facts) can be freely used under Attribution-ShareAlike license, unless stated otherwise. Cite this article:
Pterodactyloidea Facts for Kids. Kiddle Encyclopedia.