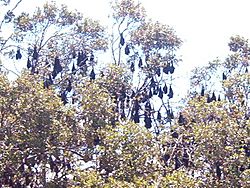 Fox Island, Australia, is believed to be home to the largest colony of flying foxes on the continent

Megabats are also called Old World fruit bats. They are the suborder Megachiroptera, family Pteropodidae of the order Chiroptera (bats).

These fruit bats are flying mammals that live in dense forests in Africa, Europe, Australia, and Asia. There are about 166 species of fruit bats. Fruit bats are sometimes known as flying foxes. These bats live in huge colonies, known as "camps." These nocturnal (most active at night) animals rest during the day while hanging upside down from their feet.

As fruit bats fly from plant to plant getting food, they also pollinate the plants they visit. In addition, they disperse the plants' seeds as they eat. Many plants, including some avocados, dates, mangos, and peaches, are dependent on these bats for either pollination or seed dispersal.

Fruit bats mostly eat fruit juice and flower nectar. They chew the fruit, then spit out the seeds, peel, and pulp. Fruit bats, like other Megachiropteran bats, use the sense of smell to find their food, fruit and/or nectar. Although they have large eyes and can see well, fruit bats do not use sight as their primary sense. Fruit bats eat other things too.

Some megabats are vectors of dangerous diseases. The first recorded human outbreak of Ebola virus was in 1976, but the source of the virus is still unknown. Recent tests have shown that some species of fruit bats collected during Ebola outbreaks show the bats have the virus, but do not show any signs of it. Further studies also show that Ebola can reproduce in fruit bats and other bats in the Tadarida genus. This could mean that the bats are the source of the virus. The Marburg virus, which is related to Ebola, has also been found in fruit bats in Uganda.

Another explanation is that fruit bats could be an intermediate host because of the uncertainty that fruit bats are the index case for Ebola. It is also important to note that certain species of fruit bats in Africa are immune to the Ebola virus and that their DNA or RNA are similar to the Zaire Ebola virus. This could explain the spread to humans since people in that region tend to eat fruit bats.

All content from Kiddle encyclopedia articles (including the article images and facts) can be freely used under Attribution-ShareAlike license, unless stated otherwise. Cite this article:
Megabat Facts for Kids. Kiddle Encyclopedia.