Pterostylis concinna, commonly known as the trim greenhood, is a species of orchid endemic to south-eastern Australia and which usually grows in colonies. It has a rosette of leaves at the base and a single dark green, white and orange-red flower. 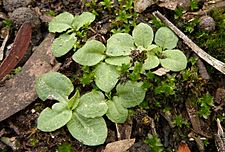 Pterostylis concinna was first described in 1810 by Robert Brown and the description was published in Prodromus Florae Novae Hollandiae et Insulae Van Diemen. The specific epithet (concinna) is a Latin word meaning "skilfully put together", "beautiful" or "appropriate".

The trim greenhood is found in New South Wales south of Mudgee and is widespread and locally common in Victoria. It also grows in Tasmania but in only two colonies in South Australia. It grows in moist forest and coastal scrub, often in sandy soil.

All content from Kiddle encyclopedia articles (including the article images and facts) can be freely used under Attribution-ShareAlike license, unless stated otherwise. Cite this article:
Pterostylis concinna Facts for Kids. Kiddle Encyclopedia.