Pterostylis sp. aff. alata (New England) is a species of orchid endemic to New South Wales but which has not yet been formally described. Non-flowering plants have a rosette of leaves but the flowering plants have a single flower with leaves on the flowering spike. This greenhood has a white flower with green markings and a brown-tipped dorsal sepal. It is only known from areas near Armidale where it grows near south-facing escarpments. 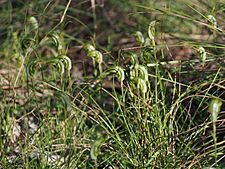 Pterostylis sp. aff. alata is a terrestrial, perennial, deciduous, herb with an underground tuber and when not flowering, a rosette of up to six broad egg-shaped leaves up to 12 mm (0.5 in) long and 11 mm (0.4 in) wide. Flowering plants have a single white flower with green stripes and veins and a brownish tip borne on a spike up to 200 mm (8 in) high. Up to three stem leaves are wrapped around the flowering stem. The dorsal sepal and petals are fused, forming a hood or "galea" over the column. The dorsal sepal is erect near its base then curves forward with a brownish tip 6 mm (0.2 in) longer than the petals and pointing downwards. The lateral sepals are held closely against the galea, have thread-like tips about 23 mm (0.9 in) long, are erect or curving backwards and have an almost flat sinus between their bases. The labellum is about 10 mm (0.4 in) long, 2 mm (0.08 in) wide, straight and only just visible above the sinus. Flowering occurs from March to May.

Pterostylis sp. aff. alata has not been formally described but is similar to Pterostylis striata, formerly known in New South Wales as Pterostylis alata.

This greenhood is only known from areas around Armidale where it usually grows near the crest of south-facing escarpments in forests.

All content from Kiddle encyclopedia articles (including the article images and facts) can be freely used under Attribution-ShareAlike license, unless stated otherwise. Cite this article:
Pterostylis sp. aff. alata (New England) Facts for Kids. Kiddle Encyclopedia.