PuTTY is a terminal emulator application which can act as a client for the SSH, Telnet, rlogin, and raw TCP computing protocols. The word "PuTTY" has no meaning, though 'tty' is sometimes used to refer to the Unix terminals, as an acronym for 'teletype'.

PuTTY was first written for Microsoft Windows, but it has been ported to other operating systems including some Unix-like platforms. Mac OS and Mac OS X are still being ported, while unofficial ports have been ported it to the Symbian and Windows Mobile operating systems.

PuTTY is currently beta software. Licensed under the MIT License, and it is free and open source software.

Some features of PuTTY are: 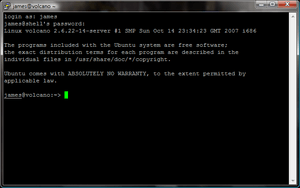 The versions available are made up of some or all of the following programs:

All content from Kiddle encyclopedia articles (including the article images and facts) can be freely used under Attribution-ShareAlike license, unless stated otherwise. Cite this article:
PuTTY Facts for Kids. Kiddle Encyclopedia.