The Puli is a small-medium breed of Hungarian herding and livestock guarding dog known for its long, corded coat. The tight curls of the coat appear similar to dreadlocks. A similar-looking, but much larger breed – also Hungarian – is the Komondor. The term used for a group of Puli is Pulik. 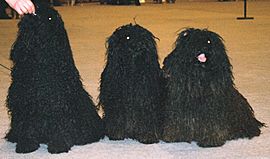 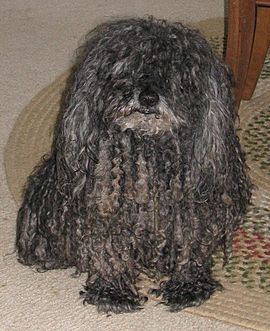 The Puli is a solid-colored dog that is usually black. Other less common coat colors are white, gray, or cream (off-white or fakó in Hungarian). A variety of the cream-coated dogs have black masks. The white Pulis are not albino, nor do they have blue eyes. They commonly have dark pigment, black pads, black noses and black pigment inside the mouth. The white gene is recessive to the pure black gene. The breed standard for females is about 16.5 inches (42 cm) at the withers and 17 inches for males. Females weigh 23-25 pounds and males slightly more. The coat of some Puli dogs can be different with either thinner or thicker cords which can be flat or round depending on the texture of the coat and the balance of undercoat to outer coat.

The coat is the result of a controlled matting process. Thin, rope-like corded coats are desired and the grooming should control the coat towards the forming of thinner ropes. The Puli's coat needs considerable grooming to keep its cords clean, neat, and attractive. With age, the coat can become quite long even reaching the ground. Alternatively, the coat can be trimmed short regularly for easy maintenance although the corded coat is what attracts many people to the breed. Contrary to some beliefs, the coat of a healthy puli will grow out again after trimming. This breed has little to no shedding.

The Puli is an intelligent and active dog. It needs obedience training while still young. If a Puli gets enough exercise, it can live in the city, but they do best when not kept indoor pets in small living spaces. Pulis kept indoors need a lot of exercise to use up their energy, or they can become either shy or overactive. They need to get the kind of exercise they were created for. A Puli without enough exercise can become mischievous and cause trouble. The right kind of exercise includes running, running with a biker, hiking, jogging and field work; not just a walk around the corner. Pulis are best kept in a house with a garden. Cozy and very friendly especially towards children, they are sensitive and prone to resentment. 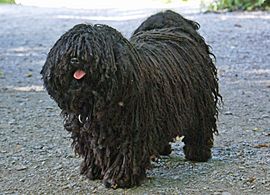 Pulis are intelligent, agile dogs. Despite their bulky appearance and very thick coat, they are very fast, agile, and able to change directions instantly and are obedient enough to train for athletic competition. They are devoted and form close bonds with their owners.

The breed is intelligent and can do well in obedience training if begun early. Traditionally, the Puli dog breed was used as a herding dog and sometimes even as a livestock guarding dog, as well. They make very good guard dogs, since they are very protective of their masters and territory. The Puli is sensitive, fun-loving, courageous, but also, at times, tough and headstrong.

They are loyal to their owners and wary of strangers. They are highly active and keep a playful, puppy-like behavior their entire lives. They need a lot of exercise and free space, preferably outdoors. They can be trained and housebroken, but Pulis are generally not very well suited as city or indoor pets. When restricted to closed spaces for long periods of times, they grow restless and may develop unwanted personality traits, such as becoming hyperactive or, instead, increasingly aloof and lazy.

As a working dog, the Puli is very obedient, focused and determined when assigned a task. Some of them are used as police dogs. As a livestock guarding dog, they are fiercely protective of their territory and flock, and, despite their relatively small size, will fearlessly try to scare and drive any intruder away, however, they very rarely inflict any real injuries.

As a family dog, they make good security dogs and faithful family guardians. They can be very friendly and playful, even in old age. They regard their family as their flock, and will keep their distance until they are sure a stranger is not a threat. When annoyed, they may attack without warning, so a considerable distance may be advisable for strangers. They can be extremely independent and obstinate, and only accept strong-willed individuals as master.

Pulis are valued for their energy and determination which is a result of their sheepdog history. Every Puli is a natural shepherd and instinctively knows how to herd a flock of sheep or livestock even if they have been raised as a family dog and have never been trained to do it. It is advisable to start training the Puli early in age, especially in obedience. They are very independent, strong-willed, and difficult to train in adulthood. 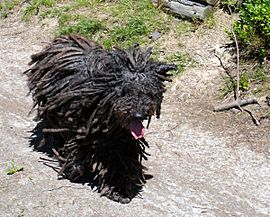 Pulis are very fast and agile

The Puli is a sheepdog from Hungary thought to be introduced by the migration of the Magyars from Central Asia more than 1,000 years ago. The Pulis were used for both herding and guarding livestock.

The Puli would commonly work together with the much larger, white Komondor, a Hungarian breed of (solely) livestock guardian dog. The Komondor is a large, solidly built dog, around 30 inches tall. The Komondor (or several Komondorok if there was a large amount of livestock) guarded the sheep or cattle mostly at night, while the Puli herded and guarded them during the day.

When wolves or bears attacked the livestock, the Puli would alert the pack and the Komondorok would come and fight the intruders. Pulis can be good at fighting off wolves, because the thick coat protects their skin from being bitten. The Komondorok usually rested during daytime but at night walked around the flock, constantly moving, patrolling the area.

Nomadic shepherds of the Hungarian plains valued their herding dogs, paying as much as a year's salary for a Puli.

Although the coats may look slightly similar, the Puli has never worked in water and the Puli's coat does not grow continuously in the same fashion as a corded Poodle's coat once the cords are formed.

Possibly the Puli’s ancestors are ancient Hungarian shepherd dogs. Travelers brought the Puli with them to the Carpathian basin, to help organize the flocks and herd the stallions of the area. Large Komondor or Kuvasz were used for guarding the flock. The Puli was also a suitable guard for flock protection but was primarily used for herding the animals. Around the beginning of the 20th century, a real turning point for the breed came when it was rediscovered but no longer used much as a sheepdog; extensive shepherding was replaced by intensive farming. The Puli’s role was reduced in the life of the flock. Although their traditional duty was kept, they started to fulfill jobs that were convenient in the circumstances of their owner: they became house dogs. After World War II, the breed became a less popular pet; even now, the breed has not been able to regain the popularity it previously enjoyed.

The U.S. Department of Agriculture imported four purebred Pulik in 1935 to Beltsville, Maryland as part of an experiment when trying to help American agriculturists concerned with the problem of herding dogs which sometimes killed the animals to which they had been entrusted to control. The Pulik were bred among themselves and crossed with the German Shepherd, the Chow Chow and perhaps with two turkish sheepdogs which were quartered there at the time. On the tests given by researchers there, Pulik scored, on the average, between 75 and 85, where other herding breeds, scored in the range of 12 to 14. Because tests were inconclusive, they were never published. When WWII broke out, the Pulik were auctioned off to professional breeders, and, it is thought that, it is from these four dogs and their progeny that history of the Puli in the United States began.

All content from Kiddle encyclopedia articles (including the article images and facts) can be freely used under Attribution-ShareAlike license, unless stated otherwise. Cite this article:
Puli Facts for Kids. Kiddle Encyclopedia.