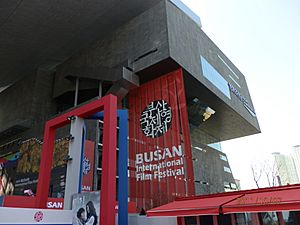 Pusan International Film Festival (PIFF) is one of the biggest movie festivals that is held in Busan, South Korea. It has been held every year since 1996. Although the name of Pusan changed to Busan, the festival committee decided to keep the name for the PIFF's authority. Every year, millions of people participate in this festival. They do this because many movie stars come to the festival. It is also the first international movie festival in Korea. PIFF promotes the culture and art of Busan internationally. It also helps Korean movies be known to the world movie market, and finds talented movie directors.

All content from Kiddle encyclopedia articles (including the article images and facts) can be freely used under Attribution-ShareAlike license, unless stated otherwise. Cite this article:
Pusan International Film Festival Facts for Kids. Kiddle Encyclopedia.