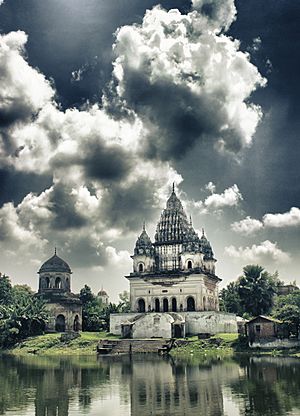 The Shiva Temple at Puthia

The Puthia Temple Complex consists of a cluster of notable old Hindu temples in Puthia Upazila, Rajshahi District, Bangladesh. Located 23 km to the east of Rajshahi city, it has the largest number of historic temples in Bangladesh. The temples were built by Hindu Zamindars Rajas of the Puthia Raj family who were noted philanthropists of Rajshahi. The temples have been built in terracotta in a variety of styles combining the typical Jor-bangla architecture with other influences. The Rajbari or Palace of the Raja of Puthia and the Dol Mancha are part of the complex. The temples are laid out around a lake with a sprawling lawn.

The Puthia Raj family was established by a holy man named Bhatsacharya, who lived in the 16th century. Raja Man Singh, governor of the Mughal emperor Akbar, confiscated the Jagir of the refractory pathan jagirdar of Rajshahi named Lashker Khan and bestowed the Zamindary on the saintly Bhatsacharya for his learning, but he declined. However, his son Pitambar was granted the Lashkarpur estate permanently. On his death, his son Nilambar received the title of Raja from Emperor Jahangir. The Puthia Royal Family estate was the second largest zamindary and the wealthiest in British Bengal. After India's partition, the then Pakistani government abolished the zamindary system and confiscated all Hindu properties. The Royal Family migrated to India shortly afterwards.

All content from Kiddle encyclopedia articles (including the article images and facts) can be freely used under Attribution-ShareAlike license, unless stated otherwise. Cite this article:
Puthia Temple Complex Facts for Kids. Kiddle Encyclopedia.