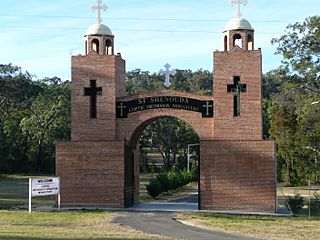 Putty is a village in New South Wales, Australia in Singleton Shire. It is north west of Sydney on the Putty Road between Windsor and Singleton.

The village lies in a wide valley. The knee-deep Putty Creek, or the Tupa, rises in north at the foot of Mt Kindarun, and runs the length of the valley before joining with the Wollemi Creek which then feeds into the Colo River.

All content from Kiddle encyclopedia articles (including the article images and facts) can be freely used under Attribution-ShareAlike license, unless stated otherwise. Cite this article:
Putty, New South Wales Facts for Kids. Kiddle Encyclopedia.