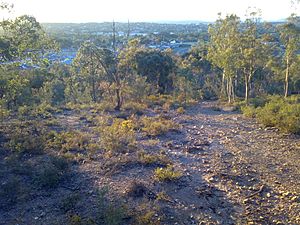 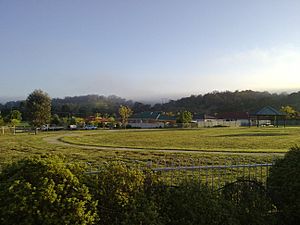 Looking towards Wright Park in Queanbeyan East from Gracelands Estate

East Queanbeyan is one of Queanbeyan's newly proclaimed suburbs, lying on the north eastern side of the Queanbeyan River, with the river forming its western boundary. The suburb is a mixed residential and industrial zone, incorporating Queanbeyan's (and one of the region's largest) manufacturing and general industrial hubs along the eastern length of Yass Road.

East Queanbeyan is predominantly residential however, featuring a mix of high density units and free standing homes. In recent years a number of new mini housing estates have been completed (or are under construction), adding significantly to the population, and providing new housing stock. Additionally a new high density residential complex has been completed adjacent to the Queanbeyan river.

The suburb contains a small general shopping strip, consisting of several major brand outlets. Queanbeyan East Public School and Queanbeyan TAFE both reside in East Queanbeyan, as do a number of significant and popular playing grounds, including the city's largest sports ground, Seiffert Oval. The suburb is notable for the number of playing grounds and general parkland within it.

Additionally, East Queanbeyan is home to a lawn bowls club, a number of restaurants, several motels, and borders the Queanbeyan Golf Club.

The Airport Motor Inn lies just inside the city, close by the railway line which forms the border with the Australian Capital Territory.

All content from Kiddle encyclopedia articles (including the article images and facts) can be freely used under Attribution-ShareAlike license, unless stated otherwise. Cite this article:
Queanbeyan East, New South Wales Facts for Kids. Kiddle Encyclopedia.