Queensbridge Park, named for the nearby Queensboro Bridge, is a 20.34-acre (8.23 ha) city park along the East River in Long Island City, Queens, New York City. The park is a primary place of recreation for residents of Queensbridge Houses and has a riverfront promenade, baseball diamonds, running paths, lawns and areas for picnicking.

During construction for the 63rd Street Tunnel which completed in 1989, a 60 by 90 feet (18 by 27 m) combined ventilation structure and emergency exit was constructed in the park.

In 2014, a large seawall was constructed against the East River to protect against erosion. The project also created a 6-ft wide promenade which was named for longtime park advocate Elizabeth McQueen.

In 2019, the park was used in the filming of the film, Clifford the Big Red Dog. 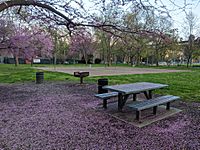 Eastern Redbud in bloom at the park.

An aerial view of the park with Ravenswood Generating Station visible.

Queensbridge Park is the venue for numerous summertime live concerts, with music ranging from R&B to Latin. It also serves as the home of the Queensbridge Little League.

All content from Kiddle encyclopedia articles (including the article images and facts) can be freely used under Attribution-ShareAlike license, unless stated otherwise. Cite this article:
Queensbridge Park Facts for Kids. Kiddle Encyclopedia.