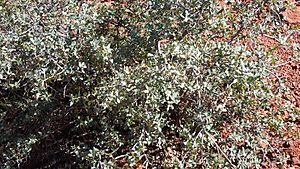 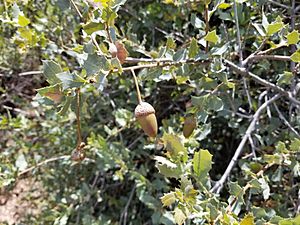 Quercus turbinella has been found in Arizona, New Mexico, Colorado, Utah, Nevada, southern California, and western Texas, Baja California, . In California it occurs in the New York mountains and a few eastern California desert ranges. The populations on the desert mountains in the western Mojave desert and the inner coastal ranges are now considered Quercus john-tuckeri.

Quercus turbinella is a shrub growing 2–5 meters (6.6–16.4 ft) in height but sometimes becoming treelike and exceeding 6 meters (20 feet). The branches are gray or brown, the twigs often coated in short woolly fibers when young and becoming scaly with age. The thick, leathery evergreen leaves are up to 3 centimeters (1.2 inches) long by 2 cm (0.79 in) wide and are edged with large, spine-tipped teeth. They are gray-green to yellowish in color and waxy in texture on the upper surfaces, and yellowish and hairy or woolly and glandular on the lower surfaces. The males catkins are yellowish-green and the female flowers are in short spikes in the leaf axils, appearing at the same time as the new growth of leaves. The fruit is a yellowish brown acorn up to two centimeters long with a shallow warty cup about a centimeter wide. This oak reproduces sexually via its acorns if there is enough moisture present, but more often it reproduces vegetatively by sprouting from its rhizome and root crown.

Quercus turbinella easily hybridizes with other oak species, including Quercus gambelii, Quercus havardii, Quercus arizonica, Q. grisea. Many species of animals use it for food, with wild and domesticated ungulates browsing the foliage and many birds and mammals eating the acorns. Animals also use the shrub as cover, and mountain lions hide their kills in the thickets.

All content from Kiddle encyclopedia articles (including the article images and facts) can be freely used under Attribution-ShareAlike license, unless stated otherwise. Cite this article:
Quercus turbinella Facts for Kids. Kiddle Encyclopedia.