Queso blanco, literally white cheese in Spanish, can refer to many different kind of cheeses whose only common trait is their white color. The specific cheese referred to depends on the region.

Queso blanco is considered one of the easier cheeses to make, as it requires no careful handling and does not call for rennet or a bacterial culture. It is usually made by heating whole fresh milk to near-boiling, adding an acidifying agent such as vinegar, stirring until curds form, then draining the curds in cheesecloth for three to five hours. Such cheeses are also known as "bag cheeses", as the curds are normally hung in a bag of cheesecloth to drain. Many Mexican home cooks make their own instead of purchasing it; when made for the evening meal, it is often prepared in early afternoon and left to drain until evening. As it is highly perishable, it must be refrigerated or used immediately once the whey has drained out.

Queso blanco and queso fresco may be eaten alone or added to other dishes. They are often used as a topping for spicy Mexican dishes such as enchiladas and empanadas, or crumbled over soups or salads. Meltable versions are used to make quesadillas. It is used to make cheesecake in some parts of the world, such as the United States. In Peruvian cuisine, several recipes mix queso fresco and spices to make a spicy cold sauce eaten over peeled boiled potatoes, such as papa a la Huancaína or ocopa.

A melted cheese appetizer using white American cheese or Monterey Jack is sometimes called "queso blanco dip", but the name is merely descriptive. It does not include queso blanco cheese. 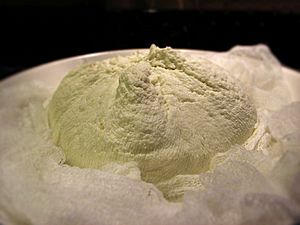 In Mexican cuisine queso blanco is traditionally made from cow's milk, whereas queso fresco may be made from a combination of cow's and goat's milk. Some versions of these cheeses, such as Oaxaca cheese, melt well when heated, but most only soften. If it is pressed, and more water is removed, it becomes known as queso seco. Sometimes it is made by pressing the whey from cottage cheese.

In Brazilian cuisine the cheese is known as queijo branco.

In Philippine cuisine, kesong puti is made from water buffalo's milk.

In Puerto Rican cuisine, queso blanco is a firm cheese used for frying and paired with papaya in sweet syrup. The cheese also goes by queso Boricua and queso frito. Although still popular, it has been losing consumers due to higher-quality cheese becoming available on the island, like Vaca negra and other cheese makers on the island.

Venezuelan cuisine has a large diversity of white cheese (quesos blancos), varying in texture and flavor, usually named after a geographical region.

The following cheese names may refer to queso blanco in the Spanish-speaking world or be considered similar to any of its local varieties.

All content from Kiddle encyclopedia articles (including the article images and facts) can be freely used under Attribution-ShareAlike license, unless stated otherwise. Cite this article:
Queso blanco Facts for Kids. Kiddle Encyclopedia.