During the Second World War it served first as an RAF station and then as a bomber airfield of the Eighth Air Force, of the United States Army Air Forces (USAAF). It remains the home of the Tower Museum Bassingbourn.

RAF personnel first arrived at Bassingbourn from RAF Uxbridge in March 1938, followed by No. 108 Squadron from RAF Cranfield in April. The first aircraft, a Hawker Hind, landed on the airfield on 2 May 1938, and the station became an Operational Training Unit (OTU) as well as a staging post for operational aircraft as part of 2 Group, RAF Bomber Command. The first Station Commander was Wing Commander F. Wright, a local man from Royston. No 108 Squadron operated Hinds until the end of June 1938, when it converted to the Bristol Blenheim I.

Bassingbourn retained its OTU role following the outbreak of the Second World War, although No. 108 Squadron was transferred to RAF Bicester and replaced by 215 Squadron. On 8 April 1940, No. 11 Operational Training Unit (OTU) was formed at Bassingbourn as part of No. 6 Group from the Station HQ and No 215 Squadron. Equipped with Vickers Wellingtons, its role was to train night bomber crews. From December 1941 to February 1942 the OTU operated from RAF Tempsford while runways were constructed at Bassingbourn.

The station was attacked on 5 April 1940 by an isolated German raider that dropped 10 bombs, causing damage to the direction finding equipment and WT (wireless transmitter) huts, and in August 1940 by a single bomb dropped on the barrack block situated immediately south of the parade ground, which killed 11 and injured 15.

At the end of May 1942 aircraft from Bassingbourn participated in the "Thousand Bomber" raid on Cologne. In order to raise this number, Bomber Command employed every aircraft capable of taking to the air, including 20 Wellington bombers from No. 11 OTU. Subsequently aircraft from here often contributed to major raids until the group moved in October 1942 to RAF Westcott.

Since approximately 1970 the site has retained its RAF links by being the home of 2484 (Bassingbourn) Squadron Air Training Corps. 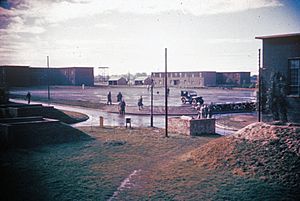 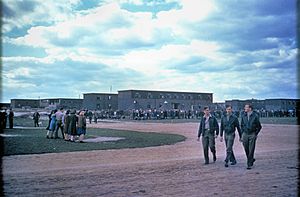 Personnel of the 91st Bomb Group at a Parade at Bassingbourn to celebrate their second year in the European Theatre of Operations, 17 September 1944.

Plans for locating United States Army Air Forces heavy bomber groups dated back to before America's entry into the war, when RAF Thurleigh was tentatively designated in November 1941. Initial concepts anticipated that 75 heavy bomb groups would eventually be based in East Anglia and the Huntingdon area in five bombardment wings (later termed air divisions), but the first plan on 24 March 1942, called for 45 groups, with four to be moved to the UK by June. This did not come to pass (of the four groups, only one eventually came to the UK, in 1944) but 75 fields were allocated by the Air Ministry on 10 August 1942 for VIII Bomber Command.

From 19 August 1942 to 25 June 1945, Bassingbourn served as headquarters for the 1st Combat Bombardment Wing of the 1st Bomb Division. It was assigned USAAF designation Station 121.

The 91st Bomb Group was the seventh of an eventual 42 heavy groups to deploy to England. A Boeing B-17 Flying Fortress unit, it moved into RAF Kimbolton on 10 October 1942, but that station, in Huntingdonshire, had not yet been reconstructed to Class A standards and was immediately found to be unsuitable for operations. Bassingbourn had recently been vacated by the RAF and made available to the Eighth Air Force. The commanding officer of the 91st BG inspected Bassingbourn on 13 October 1942 and, not wanting to lose the opportunity, moved his entire unit there the next day before seeking permission.

The 91st BG was assigned to the 1st Combat Bombardment Wing, also at Bassingbourn. The group tail code (after June 1943) was a "Triangle A". Its operational squadrons and fuselage codes were: 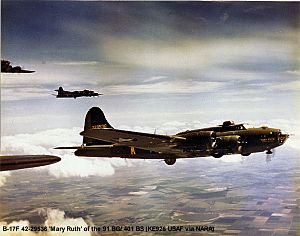 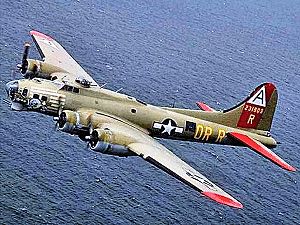 The Eighth Air Force in general and the 91st Bomb Group in particular were critically short of support personnel, and the airfield remained under RAF administration until 21 April 1943. The final commanding officer of RAF Bassingbourn before its transfer was Squadron Leader J. S. Ellard.

The 91st began combat operations from Bassingbourn on 7 November 1942, as one of the four "pioneer" B-17 groups. The group operated primarily as a strategic bombardment organization throughout the war.

The first eight months of operations concentrated against the German submarine campaign, attacking U-boat pens in French ports or construction yards in Germany in 28 of the first 48 missions flown. Secondary targets were Luftwaffe airfields, industrial targets, and marshalling yards.

The 91st BG received a Distinguished Unit Citation for bombing marshalling yards at Hamm on 4 March 1943 in spite of adverse weather and heavy enemy opposition. From the middle of 1943 until the war ended, the Group engaged chiefly in attacks on aircraft factories, aerodromes, and oil facilities. Specific targets included airfields at Villacoublay and Oldenburg, aircraft factories in Oranienburg and Brussels, chemical industries in Leverkusen and Peenemünde, ball-bearing plants in Schweinfurt and other industries in Ludwigshafen, Berlin, Frankfurt, and Wilhelmshaven.

Expanding its operations to include interdictory and support missions, the group contributed to the Battle of Normandy by bombing gun emplacements and troop concentrations near the beachhead area in June 1944 and aided the Saint-Lô breakout by attacking enemy troop positions on 24 and 25 July 1944. The 91st flew tactical bombing missions on the front line near Caen in August 1944 and attacked communications near the battle area during the Battle of the Bulge in December 1944 and January 1945. In support of Operation Varsity, the group assisted the push across the Rhine by striking airfields, bridges and railways near the front line in the spring of 1945.

The 91st Bomb Group continued combat operations until 25 April 1945, flying 340 missions. In terms of its casualties, 197 B-17s failed to return to Bassingbourn, the US Eighth Air Force's highest heavy bomber loss at any USAAF station in the UK.

After V-E Day the group helped to evacuate prisoners of war (POW) from German camps. During June and July 1945, the 91st BG withdrew from Bassingbourn and returned to the United States, being assigned on paper to Drew Field, Florida, while its personnel were being discharged. Its B-17s were flown to storage in Texas and Arizona. On 7 November 1945 the group was inactivated. 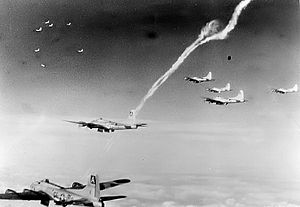 VIII Bomber Command quadrupled in size from May 1943 to August to implement the Pointblank Directive. As part of this expansion, RAF Bassingbourn temporarily hosted the flying echelon of the new 94th Bombardment Group from April to May 1943. The 94th flew a few missions from Bassingbourn while under the tutorage of the 91st Bomb Group until moving to RAF Earls Colne on 12 May 1943.

At the same time, VIII Bomber Command proceeded with its plan to organise the groups into "combat wings" which in turn were organised into "bombardment wings" (later "divisions"). The first of these, the 101st Provisional Combat Bomb Wing, commanded by Brigadier General Frank A. Armstrong, Jr., set up its headquarters at Bassingbourn on 16 April 1943. In August Brig. Gen. Robert B. Williams succeeded to command of the 101st PCBW, followed by Brig. Gen. William M. Gross when the organisation was redesignated 1st Combat Bomb Wing on 13 September 1943.

During 1943 RAF Bassingbourn was the focus of a number of media events. The station and its locality were featured in the documentary film Memphis Belle: A Story of a Flying Fortress. One of the Memphis Belle's propellers stands to greet you at the gatehouse on entering the Army Training Regiment. The airfield and group were also the subject of a series of newspaper articles written by John Steinbeck during the spring and summer of 1943. Captain Clark Gable had temporary duty at Bassingbourn while producing a gunnery film for the USAAF. It also served as the location for the fictional "28th Bomb Group" in the 1950 Humphrey Bogart film Chain Lightning. Away from Hollywood, but still in the movies, RAF Bassingbourn was also the setting for the Airfield-based shots in the 1955 film, The Dambusters, featuring Richard Todd and Michael Redgrave. In 1986/7 Stanley Kubrick used the barracks as a lot (Paris Island)in his film, Full Metal Jacket. The fake palm trees were there for a few years afterwards.

The RAF resumed occupation of Bassingbourn on 26 June 1945, the airfield was officially returned on 10 July 1945. The station became one of the main airfields for long-range transport aircraft. In 1948 and 1949 Avro York, Avro Lancaster and Douglas Dakota aircraft from the base took part in the Berlin Airlift, a massive operation transporting essential commodities to the beleaguered city.

During the late 1940s, the United States Air Force began rotating deployments of Strategic Air Command (SAC) Boeing B-29 and Boeing B-50 Superfortresses squadrons to the United Kingdom as "Show of Force" deployments.

With the Soviet blockade of Berlin in 1948 and the subsequent Berlin Airlift, these aircraft began regular deployments to the United Kingdom. These deployments were designed to send a message to the Soviet Union that despite the Berlin Airlift and Korean War, the United States was prepared to respond with atomic weapons to any Soviet aggression in Western Europe. Besides Bassingborn, SAC deployed squadrons of bombers to RAF Lakenheath and RAF Marham in Norfolk.

Jurisdiction of Bassingbourn remained with the Royal Air Force. The United States Air Forces in Europe (USAFE) 7516th Air Support Squadron, 3909th Air Base Group stationed at RAF South Ruislip provided logistical support for these squadrons while in the UK. These deployments were of a brief nature, beginning in August 1950 and ending in May 1951. It is unknown if any United States atomic weapons were ever deployed to the United Kingdom.

In February 1952, RAF Bassingbourn received its first allocation of English Electric Canberra bombers and became the first jet bomber operational conversion unit (OCU) in the world. Canberras operated from Bassingbourn for 17 years and one of the aircraft is on static display in the Barracks. From 1963 to 1969 the Joint School of Photographic Interpretation was also located there.

On 29 August 1969, the last RAF Commanding Officer, Sqn Ldr A.M. McGregor MBE, turned over the station to the British Army as Bassingbourn Barracks. 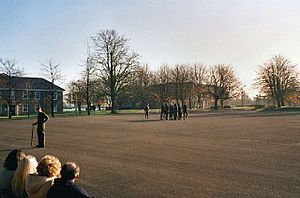 A passing-out parade at Bassingbourn Barracks

The former RAF Bassingbourn station was established as Bassingbourn Barracks in January 1970, as the new depot for the Queen's Division. The depot was responsible for training recruits undergoing their basic training before joining a regular battalion. In 1993 the Barracks were re-designated the home of the Army Training Regiment, Bassingbourn and remained as such for nearly 20 years. Bassingbourn Barracks closed as an army training location in August 2012, and re-opened in December 2018 as home to the Mission Training and Mobilisation Centre.

Opened in 1974, the Tower Museum, Bassingbourn is located in the original pre-war air traffic control (ATC) tower (watch office) of RAF Bassingbourn. The museum is focused on the history of the airfield during the Second World War and the men and women of the RAF and USAAF who trained and worked there during that war. Exhibits include photographs, documents and military artefacts about the RAF, USAAF and the 91st Bombardment Group. The museum is currently closed but is due to reopen in 2019.

All content from Kiddle encyclopedia articles (including the article images and facts) can be freely used under Attribution-ShareAlike license, unless stated otherwise. Cite this article:
RAF Bassingbourn Facts for Kids. Kiddle Encyclopedia.