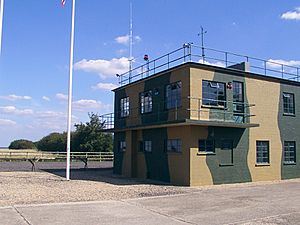 Twinwood Farm opened in mid 1941 when the RAF began to use the grassed field. By April 1942 it had three concrete runways and additional temporary buildings.

From then until the end of the war the Bristol Blenheims, Bristol Beaufighters, Bristol Beauforts, Douglas Havocs and de Havilland Mosquitoes of No. 51 Operational Training Unit used 'Twinwoods', as it was generally known.

In March 1943 North American Mustangs belonging to 164, 169, 239 and 208 Squadrons RAF engaged in Operation Spartan which occurred between 1 and 12 March 1943 was conducted across southern and central England to test a wide range of procedures and tactics of British and Canadian Forces.

In 1944 the airfield was transferred to the U.S. Eighth Air Force and operated in conjunction with the nearby RAF Thurleigh.

Twinwood Farm was where USAAF Major Glenn Miller's aircraft took off on 15 December 1944 for Paris. His plane disappeared over the English Channel and was never found.

The site is now home to the Twinwood Arena, a large natural amphitheatre which plays host to various music festivals promoted by Twinwood Events including the Rhythm Festival.

The Glenn Miller Museum is located in the restored control tower and features displays about Glenn Miller, RAF Twinwood Farm, and the Second World War.

Other buildings house different displays including:

The group of museums are also known as Twinwood Airfield Museum, and are open seasonally.

All content from Kiddle encyclopedia articles (including the article images and facts) can be freely used under Attribution-ShareAlike license, unless stated otherwise. Cite this article:
RAF Twinwood Farm Facts for Kids. Kiddle Encyclopedia.