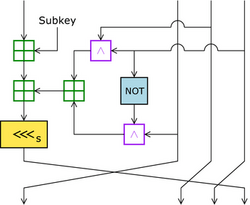 In cryptography, RC2 is a symmetric-key block cipher. Designed by Ronald Rivest in 1987. "RC" stands for "Rivest Cipher", or alternatively, "Ron's Code".

RC2 is a 64-bit block cipher with a variable key size and using 18 rounds.

The 18 rounds are performed using the following interleaved sequence:

RC2 uses key-expansion algorithm by which an expanded key consisting of 64 (16-bit words) is produces depending in a complicated way on every bit of the supplied "variable-length" input key. A mixing round consists of four applications of the "mix-up" transformation, as shown in the diagram. A round is "mashed" by adding to it one of the 16-bit words of the expanded key (RFC 2268).

The development of RC2 was sponsored by Lotus, who were seeking a custom cipher be exported as part of their Lotus Notes software, after evaluation by the NSA. The NSA suggested a couple of changes, which Ronald Rivest incorporated. After further negotiations, the cipher was approved for export in 1989.

Along with RC4, RC2 with a 40-bit key size was treated under US export regulations for cryptography. Now all 40-bit encryption algorithms are obsolete because they are dangerously susceptible to brute force attacks.

Initially, the details of the algorithm were kept secret — proprietary to RSA Security — but on 29 January 1996, source code for RC2 was anonymously posted to the Internet on the Usenet forum, sci.crypt. A similar post had occurred earlier with RC4. It is unclear whether the poster had access to the specifications or whether it had been reverse engineered.

All content from Kiddle encyclopedia articles (including the article images and facts) can be freely used under Attribution-ShareAlike license, unless stated otherwise. Cite this article:
RC2 Facts for Kids. Kiddle Encyclopedia.