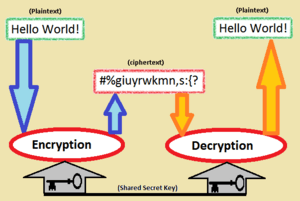 In a symmetric-key algorithm the key used to encrypt is the same as the one used to decrypt. For this reason, it needs to be kept secret.

Symmetric-key algorithms is a method in cryptography. It is when the keys for decryption and encryption are exactly the same shared secret. You can generate the secret randomly, or from a password, or through a secret key-exchange procedure like Diffie-Hellman.

There are two kinds of symmetric-key algorithms, called stream ciphers and block ciphers. Stream ciphers encrypt a message as a stream of bits one at a time. Block ciphers take blocks of bits, encrypt them as a single unit, and sometimes use the answer later too. Blocks of 64 bits have been commonly used; though modern ciphers like the Advanced Encryption Standard use 128-bit blocks.

Other terms for symmetric-key encryption are secret-key, single-key, shared-key, one-key and eventually private-key encryption. This last term does not have the same meaning that the term private key has in public-key cryptography.

One disadvantage of symmetric-key algorithms is the requirement of a shared secret key, with both parties holding the same copy at each end. In order to ensure secure communications between everyone in a group of n people a total of n(n - 1)/2 keys are needed, which is the total number of possible communication channels. To limit the impact of a potential discovery by a cryptographic attacker, they should be changed regularly and kept secure during distribution and in service. The process of selecting, distributing and storing keys is known as key management, and is difficult to achieve reliably and securely.

Systems that use such a hybrid approach include SSL, PGP and GPG, etc.

All content from Kiddle encyclopedia articles (including the article images and facts) can be freely used under Attribution-ShareAlike license, unless stated otherwise. Cite this article:
Symmetric-key algorithm Facts for Kids. Kiddle Encyclopedia.