Construction for the RCMP Heritage Centre began in 2005. The facility was officially opened to the public on 23 May 2007.

The centre is situated in a 6,000-square-metre-building (65,000 sq ft) south of Dewdney Avenue, adjacent to "F" Division headquarters at RCMP Academy, Depot Division in Regina, Saskatchewan, Canada. Completed in 2007, the building was estimated to have cost C$40 million. Nick Milkovich Architects was the design architect for the project, with Arthur Erickson serving as a design consultant for the building; P3 Architects served as the architect of record for the project. Construction of the building was contracted to PCL Construction.

Building materials used for the construct the heritage centre includes concrete, glass, Tyndall stone, and limestone quarried from Manitoba. The massing of the building was designed to appear like it is sinking and rising into the landscape. The building's roof resembles windblown snow, or encampments used by the First Nations and North-West Mounted Police during the 19th century. The building features a "swooping" rooftop, making the height of the building roof range between 9.1 to 19.8 metres (30 to 65 ft). The northeast exterior of the building features 21 oval-shaped columns varying from 9 to 17 metres (30 to 56 ft) in length.

The interior of the building features coloured concrete floors, with metal ceilings. The building also includes a 124-seat lecture hall/theatre. 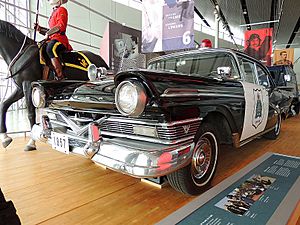 An exhibit at the RCMP Heritage Centre, April 2013

The heritage centre's main gallery holds a permanent exhibition that explore the history of the force, or exhibits practices in forensics. Exhibits in the main gallery includes Creating a Mounted Police, Maintaining Law and Order in the West, Protecting the North, Serving all of Canada, Preserving the Tradition, and Cracking the Case. The heritage centre "Feature Exhibition" is situated in a different hall, and exhibits specialty items from its collection for a limited time. A number of the items in the institution's collection originates from the collections of the defunct RCMP Centennial Museum.

All content from Kiddle encyclopedia articles (including the article images and facts) can be freely used under Attribution-ShareAlike license, unless stated otherwise. Cite this article:
RCMP Heritage Centre Facts for Kids. Kiddle Encyclopedia.