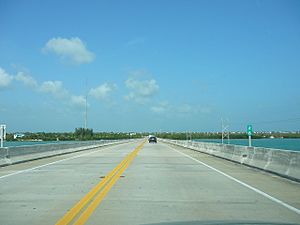 Ramrod Key is an island in the lower Florida Keys. Originally named Roberts Island, Ramrod Key was renamed for a ship named Ramrod, which was wrecked on a reef south of there in the early nineteenth century.

Until the construction of U.S. Route 1 in the 1920s, the only building on Ramrod was a post office that was alongside the train tracks. U.S. 1 (or the Overseas Highway) crosses Ramrod Key at approximately mile markers 26—27.5, between Summerland Key and Middle Torch Key.

Ramrod Key is a popular tourist site due to the short distance between the island and Looe Key. Current (2014) commercial enterprises of visitor interest include a dive shop-hotel-bar/restaurant complex,a bar/restaurant and miniature golf complex, a gas station-grocery, and a Cuban deli/grocery.

All content from Kiddle encyclopedia articles (including the article images and facts) can be freely used under Attribution-ShareAlike license, unless stated otherwise. Cite this article:
Ramrod Key Facts for Kids. Kiddle Encyclopedia.