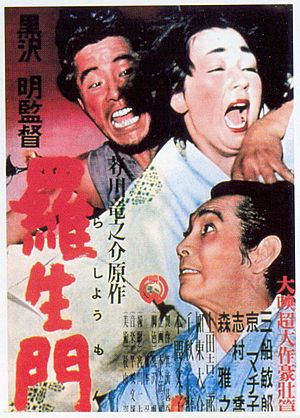 Rashomon (羅生門, Rashōmon) is a Japanese movie directed by Akira Kurosawa and released in 1950.

The movie is based on two short stories by Ryūnosuke Akutagawa.

The 1964 movie The Outrage was a remake of Rashomon. Kurosawa was acknowledged for the screenplay. The movie's concept is also mirrored in many other movies, including Hero, Vantage Point, Courage Under Fire and Basic.

All content from Kiddle encyclopedia articles (including the article images and facts) can be freely used under Attribution-ShareAlike license, unless stated otherwise. Cite this article:
Rashomon Facts for Kids. Kiddle Encyclopedia.