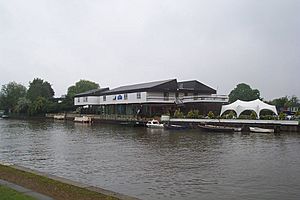 Raven's Ait is an ait (island) in the Thames between Surbiton, Kingston and Hampton Court Park in the Royal Borough of Kingston upon Thames, London, England, in the reach of the river above Teddington Lock. Used as a boating training centre for many years, Raven's Ait is currently privately run as a catering facility and a conference and wedding venue.

Raven's Ait is a Thames ait between Surbiton, Kingston and Hampton Court Park in the Royal Borough of Kingston upon Thames in the centre of the non-tidal reach above Teddington Lock, and immediately below Seething Wells.

Access to the island is by ferry from Queen's Promenade on the south bank of the Thames. This is adjacent to the Thames Sailing Club and a small area, once a draw dock, used for transporting goods to the area and the former fresh water works to the south.

Raven's Ait is a possible site for the signing of documents that led to the ratification of 1215 Magna Carta.

In more recent times, Raven's Ait has been used as a boating centre. From the nineteenth century, the island was home to Kingston Rowing Club, founded in 1858, which now occupies a clubhouse at Canbury Gardens in nearby Kingston. Long occupied by The Navy League, then the charity responsible for the Sea Cadet Corps and the Girls' Nautical Training Corps, Raven's Ait was the home of TS Neptune. This was a sailing, canoeing and boating training establishment, run with naval discipline, which the Duke of Edinburgh visited in 1958. The Navy League ceased to have this role in 1971 when it invested in TS Royalist, a small sail training Brig. 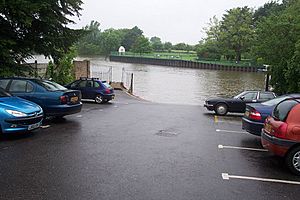 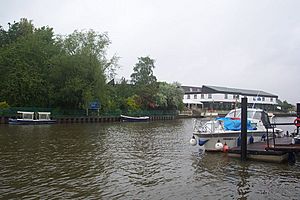 Looking downstream from the draw dock

Originally the island's buildings were wooden clad "Sea Cadet Blue", with old–style dormitories. In 1971 the entire accommodation, except the superintendent's house, was rebuilt by Haymills Construction, replacing all the old wooden structures with today's island buildings. During the rebuilding, a small number of activities were carried on downstream of Kingston upon Thames, at the Albany Park sailing base opposite The Royal Canoe Club, with instructors commuting daily by boat.

During the 1980s the Inner London Education Authority used the Ravens Ait's facilities as a youth and community workers training centre and a water sports activity facility, until the island was sold to Kingston Borough Council in 1989.

The council leased the island to a company for use as a conference and wedding centre, the Ravens Ait Hall Management Company Ltd, which went into administration and closed in December 2008.

In early 2009 squatters occupied the island with the declared aim of turning its facilities into an eco conference centre. Kingston Council, who owned the freehold, took court action and the occupants were evicted on 1 May 2009. According to local media reports, during their stay the squatters had used as much electric power as would supply 45 homes However this was disputed by the squatters who said that this was because before they arrived large industrial refrigerators and other appliances had been left running by the owners.

Since 2009 the island has been used mainly as a venue for weddings and corporate events.

Raven's Ait was accredited by the Royal Yachting Association and by the British Canoe Union to conduct training in their respective disciplines. It also provided a semi-permanent mooring for Sparkle, a catamaran designed by Angus Primrose to be sailed by persons of restricted physical ability and mobility.

The boats were almost all naval stock, diesel powered:

Basic pulling skills were taught, usually to Sea Cadets, either in the ASC or in one of a pair of admiralty whalers (a clinker built pulling boat of approximately 28' LOA, slim beam, designed for naval pulling races, but originally a practical ship's boat).

Boats were a mixture of typical naval stock and somewhat strengthened "ordinary" dinghies.

There were the following fleets:

A number of schools used Raven's Ait for watersports under the Navy League, including:

All content from Kiddle encyclopedia articles (including the article images and facts) can be freely used under Attribution-ShareAlike license, unless stated otherwise. Cite this article:
Raven's Ait Facts for Kids. Kiddle Encyclopedia.