Recreation in Toronto facts for kids 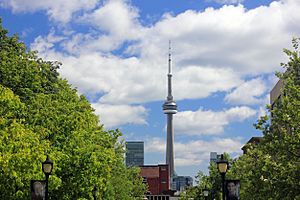 The CN Tower is one of several major attractions in Toronto.

Recreation in Toronto consists of a varied selection of activities and events throughout the city year-round. Toronto boasts renowned theatre and arts communities, has a wide range of recreational public services, and offers many attractions for both residents and tourists. 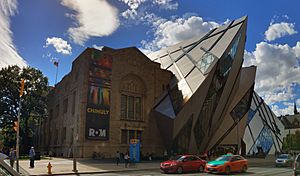 The Royal Ontario Museum is a museum of art, world culture and natural history. It is the largest, and most visited museum in Canada.
Main page: Culture in Toronto

Toronto has a broad and diverse cultural sector, and is a major scene for theatre and other performing arts. More than fifty ballet and dance companies, six opera companies, and two symphony orchestras are located in the city. Toronto is home to the National Ballet of Canada, the Canadian Opera Company, and the Toronto Symphony Orchestra. Notable performance venues include the Four Seasons Centre for the Performing Arts, Roy Thomson Hall, the Princess of Wales Theatre, the Royal Alexandra Theatre, Massey Hall, the Toronto Centre for the Arts, the Elgin and Winter Garden Theatres and the Hummingbird Centre.

The Royal Ontario Museum (ROM) is a major museum for world culture and natural history. The Art Gallery of Ontario contains a large collection of Canadian, European, African and contemporary artwork. The Gardiner Museum of ceramic art consists of more than 2,900 ceramic works from Asia, the Americas, and Europe. The Bata Shoe Museum also features many unique exhibitions. The Don Valley Brick Works is a former industrial site, which opened in 1889, and has recently been restored as a park and heritage site. 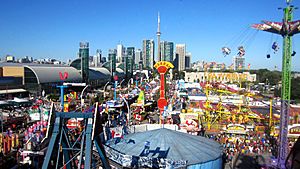 Toronto's Caribana festival is one of North America's largest street festivals, taking place from mid-July to early August of every summer. The first Caribana took place in 1967 when the city's Caribbean community celebrated Canada's Centennial year. Forty years later, it has grown to attract one million people to Toronto's Lake Shore Boulevard annually. Tourism for the festival is in the hundred thousands, and each year, the event generates about $300 million in revenues.

The Toronto Santa Claus Parade is the world's longest-running children's parade. Held annually in mid-November, the event draws more than half a million visitors each year. The parade is also televised and broadcast around the world.

Numerous other events take place in the city, such as the Toronto International Film Festival, which screens films in a number of a cinemas across Toronto. These are sponsored by federal, provincial and municipal government, by local business and international companies, by community groups, and by volunteer, charitable, educational and religious organizations.

Toronto's most famous landmark is the CN Tower. Defining the Toronto skyline, the 553.33 m (1,815 ft, 5 in) structure is an important telecommunications hub and a centre of tourism.

Doors Open Toronto is a free event held in the spring that showcases many of the city's unique and historically significant buildings to the public. 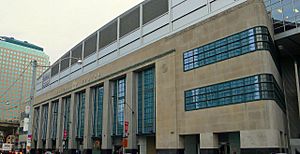 The city has a broad range of professional sport franchises, with clubs in six major North American leagues. With approximately 200 matches contested in the city, attending a professional game is possible throughout the year. The city is famously known for the Toronto Maple Leafs hockey franchise, and is also home to the Toronto Argonauts, Toronto Blue Jays, Toronto Raptors, Toronto Rock, and Toronto FC.

Attending an amateur sporting event is affordable, with plentiful options throughout the city in many sports. There is also strong participation in amateur and recreational sporting activities in Toronto, reflecting the active urban lifestyle it promotes.

All content from Kiddle encyclopedia articles (including the article images and facts) can be freely used under Attribution-ShareAlike license, unless stated otherwise. Cite this article:
Recreation in Toronto Facts for Kids. Kiddle Encyclopedia.