List of tourist attractions in Toronto facts for kids 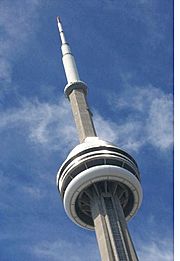 Toronto, Ontario, Canada is known for its many attractions. Some of these attractions are notable worldwide.

Toronto's most famous landmark is the CN Tower, a 553 metre- (1,815 foot-) tall steel and concrete transmission tower and observation deck, which is one of the tallest structures in the world.

Toronto's City Hall is one of the city's most distinctive landmarks. Built to replace its predecessor — now known simply as Old City Hall — its modernist style has been used as a backdrop in American films to depict a city of the future. Directly in front of City Hall is Nathan Phillips Square, a public space that frequently houses concerts, art displays, a weekly farmers' market, and other public events. It is also the site of a reflecting pool that, during the winter, becomes a popular skating rink.

Yonge-Dundas Square is the city's newest and flashiest public square, located across the street from the Toronto Eaton Centre, a large, popular shopping mall long enough to have Toronto Transit Commission subway stops at both the northern and southern ends of the mall. Another upscale shopping mall with subway access is the Yorkdale Shopping Centre, although this mall sits outside of the city centre at the intersection of two highways, Allen Road and the 401. Queen's Park, an historic scenic park and public space, surrounds Ontario's Legislative Assembly.

The Toronto Islands form part of the largest car-free urban community in North America. Accessible by ferry, "the Islands" include a public park and a children's amusement park, Centreville. The city has several large forested urban parks, the best known being High Park to the west of downtown. The city is crisscrossed by a network of ravines that have remained almost wholly undeveloped. The Martin Goodman Trail also traverses the entire lakeshore from one end of the city to the other, a section of this trail runs as a Boardwalk through the Beaches area, from Ashbridges Bay to Victoria Park Avenue. The Scarborough Bluffs are cliffs along much of Scarborough's shores.

The Roman Catholic St. Michael's Cathedral and the Anglican St. James' Cathedral are both on Church Street.

The Distillery District is a collection of old and restored industrial buildings from the 19th century which now feature artworks and historical artifacts from Toronto's early industrial past.

Casa Loma is the only full sized castle in North America, one of Toronto's major historic attractions. It has Edwardian decor, secret passageways, elaborately decorated rooms with authentic period furnishings, and a scenic view of Toronto.

The five acre grounds contains ornate sculptures and fountains as well as perennial flowers, and a wooded hillside with wildflowers and grasses.

The stables and carriage house are connected to Casa Loma by an 800-ft. tunnel which runs 18ft below Austin Terrace. The tunnel features an exhibit of Toronto's Dark Side, with archival photographs of Toronto's darker days such as Prohibition, The Depression, The Plague, The Great Toronto Fire, and Toronto's first plane crash. The carriage house features an Automotive Exhibit featuring vintage automobiles from the early 1900s.

Theatre is a big draw to the city as well with many theatre festivals and eclectic blend of small, medium and large scale productions going on at any given time. Recent large-scale productions to play Toronto include national tours of Avenue Q, The Drowsy Chaperone, Spelling Bee, My Fair Lady and Happy Days. Jersey Boys is the current big hit in the city beginning as a tour and transforming into a sit-down production with a mostly Canadian cast due to audience demand. Jim Steinman's Bat Out Of Hell the Musical is presently making its North American debut in Toronto, through the end of 2017.

All content from Kiddle encyclopedia articles (including the article images and facts) can be freely used under Attribution-ShareAlike license, unless stated otherwise. Cite this article:
List of tourist attractions in Toronto Facts for Kids. Kiddle Encyclopedia.