The red-breasted sapsucker (Sphyrapicus ruber) is a medium-sized woodpecker of the forests of the west coast of North America.

Adults have a red head and upper chest; they have a white lower belly and rump. They are black on the back and wings with bars; they have a large white wing patch. Red-breasted sapsuckers nest in tree cavities. Northern birds migrate to the southern parts of the range; birds on the coast are often permanent residents. Like other sapsuckers, these birds drill holes in trees and eat the sap as well as insects attracted to it. They sometimes catch insects in flight; they also eat seeds and berries. These birds interbreed with the red-naped sapsucker or yellow-bellied sapsucker where their ranges overlap.

Until recently, the red-breasted sapsucker and red-naped sapsucker were considered a single species. Sapsuckers are in the Picidae, or woodpecker, family, in the order Piciformes.

The wing barring is white in both variants. 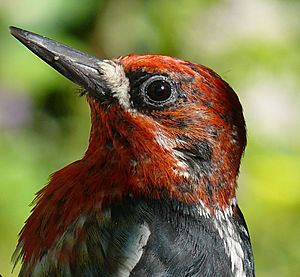 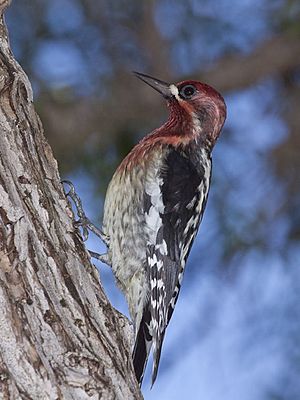 Red-breasted sapsuckers breed from southeast Alaska and British Columbia south through the Pacific Coast Ranges of western Washington and Oregon and northern California. The breeding habitat is usually forest that includes pine, hemlock, Douglas-fir, fir, and spruce, though they are known to use other woodland habitats.

The northern birds that breed in migrate south in the winter, and individuals that breed in inland and upland locales often move to the coastal lowlands in winter, where the weather is milder. Winter habitat can be deciduous or coniferous woodland. This species’ winter range extends south to Baja California in Mexico.

Red-breasted sapsuckers prefer old-growth forest. They require living trees to provide the sap on which they feed.

A sapsucker's tongue is adapted with stiff hairs for collecting the sap. Red-breasted sapsuckers visit the same tree multiple times, drilling holes in neat horizontal rows. A bird will leave and come back later, when the sap has started flowing from the holes. Repeated visits over an extended period of time can actually kill the tree. The insects attracted to the sap are also consumed, and not only by sapsuckers. Rufous hummingbirds, for example, have been observed to follow the movements of sapsuckers and take advantage of this food source.

The red-breasted sapsucker begins work on its nest hole in a dead tree, usually a deciduous tree, in April or May, and produces one brood per breeding season. The female lays 4-7 pure white eggs. Both parents feed the young, and the fledglings leave the nest at 23–28 days old. The nest cavity is not reused.

These birds make various noises; their vocalizations include a variety of chatter, squeals, and scream-like calls, and they also drum with their bills on various surfaces. Many of these noises serve to establish territory and attract a mate. This is in addition to the noise made by drilling holes for feeding and by excavating nest cavities.

All content from Kiddle encyclopedia articles (including the article images and facts) can be freely used under Attribution-ShareAlike license, unless stated otherwise. Cite this article:
Red-breasted sapsucker Facts for Kids. Kiddle Encyclopedia.