On December 7, 1994, the 50-ton stone bearing the petroglyphs fell from a sandstone cliff above the Red Bird River, onto Kentucky Route 66 at Lower Red Bird. On December 9, 1994, it was transported to its present location in Rawlings/Stinson Park in Manchester, where it is roofed over and fenced. The original site was enrolled on the National Register of Historic Places in September 1989, but was delisted in 2003 after the inscribed stone was relocated. 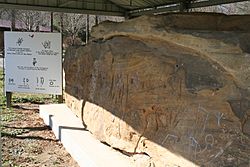 The petroglyphs as currently displayed at Rawlings/Stinson Park in Manchester

The inscribed surface measures 1.6 m (5.5 ft) in height and 6 m (20 ft) in length. The sharply incised and linear carvings have been described as "different from any of the previously reported Kentucky petroglyphs." Construction and later widening of Highway 66 undermined the inscribed surface and left it 16 feet above the roadway. It is estimated that it was originally at chest height before construction of the highway. A state historical marker on the river attributes the markings to the Cherokee Chief Red Bird, for whom the river was named.

Dr. Kenneth Tankersley of the University of Cincinnati reports that Chief Red Bird (Dotsuwa, literally "Cardinal") spent considerable time hunting and trapping in the vicinity of two rock shelters on opposite banks of the river. In 1796 or early 1797, he and his Cherokee friend Will Emory were murdered for their furs by two white men near the Red Bird River Petroglyphs on the east bank. They are thought to have been buried in the Red Bird River Shelter Petroglyphs site on the west bank. Red Bird's descendants frequently visit the two sites.

According to Tankersley, the left portion of the Red Bird River Petroglyphs includes traditional Cherokee symbols for the Deer and Bear clans, while the central portion includes symbols for the Chickamauga people and the story of their origin, as well as for the Bird and Bear clans. He confirms that "the petroglyphs have always been attributed to Red Bird."

A sign adjacent to the relocated stone in Manchester states that "At least 8 Old World alphabets are engraved on it. These alphabets were extinct when Columbus arrived in the New World in 1492. The alphabets are first century Greek and Hebrew, Old Libyan, Old Arabic and Iberian-Punic which probably dates from the 9th century B.C. Ogam, Germanic runes and Tiffinag-Numidian are also on this stone."

All content from Kiddle encyclopedia articles (including the article images and facts) can be freely used under Attribution-ShareAlike license, unless stated otherwise. Cite this article:
Red Bird River Petroglyphs Facts for Kids. Kiddle Encyclopedia.