Revillo is a town in southeastern Grant County, South Dakota, United States. The population was 119 at the 2010 census.

The name of the town most likely was derived from a backwards spelling of the proper name "Olliver".

According to the United States Census Bureau, the town has a total area of 0.17 square miles (0.44 km2), all of it land.

There were 53 households, of which 32.1% had children under the age of 18 living with them, 41.5% were married couples living together, 13.2% had a female householder with no husband present, 5.7% had a male householder with no wife present, and 39.6% were non-families. 39.6% of all households were made up of individuals, and 28.3% had someone living alone who was 65 years of age or older. The average household size was 2.25 and the average family size was 3.00.

Since agriculture is the #1 industry in the area, Revillo Farmers Elevator is the address for crop trading. Part of its selection on tradable goods is grain, feed, and seed. 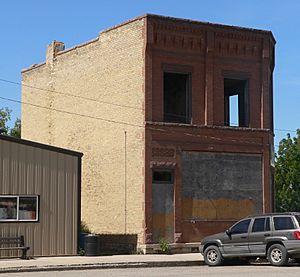 Center of Revillo's education is the K-12 Grant-Deuel School. Grant-Deuel High School is the home of the Wildcats, the local football team. Throughout the years the high school was visited by several international exchange students, who lived with families nearby. The school recently had a wood floor installed in the gymnasium. Campaigning for the installation of the wood floor went by the name of 'WOW', or 'Wildcats on Wood'. The Grant - Deuel School will close in the spring of 2017.

All content from Kiddle encyclopedia articles (including the article images and facts) can be freely used under Attribution-ShareAlike license, unless stated otherwise. Cite this article:
Revillo, South Dakota Facts for Kids. Kiddle Encyclopedia.