Riaz Ahmed Gohar Shahi (Urdu: ریاض احمد گوہر شاہی; born 25 November 1941) is a spiritual leader and founder of the spiritual movements RAGS International (now known as Messiah Foundation International) and Anjuman Serfaroshan-e-Islam. He is the author of many Urdu books on spirituality. The most popular of his books is Deen-e-Ilahi "The Religion of God" (2000) which has recently been republished by Hay House and translated into English, Arabic, Thai, Persian, Hindi and other languages by Messiah Foundation International.

RAGS International was renamed to Messiah Foundation International in 2000. MFI claims that Shahi is the Mehdi, Messiah, and Kalki Avatar.

Shahi was born on 25 November 1941, in the village of Dhok Gohar Shah in the district of Rawalpindi in British India. He is a fifth generation descendant of the Sufi Baba Gohar Ali Shah.

At the age of twenty, when he was the owner of F.Q. Steel Industries, Shahi began to search for spirituality. Eventually he became disillusioned in this search and returned to work. Shahi then married and had three children.

In 1975, he went to Sehwan Sharif for self-mortification. He spent a period of three years in the mountains of Sehwan Sharif and the forest of Laal Bagh in self-purification.

The CEO of Messiah Foundation International is Younus AlGohar. Shahi claimed to have met with Jesus Christ in 1997.

Shahi at an event at Imam Bargah-e-Noor-e-Iman Mosque, in Karachi, Pakistan. He is seen here speaking to two religious clerics from different sects within Islam: Shia Islam and Sunni Islam.

He and many of his followers have been convicted under Islamic blasphemy by an antiterrorist court in Sindh. After he fled to England, Shahi was convicted in absentia, receiving sentences that totaled approximately 59 years.

Shahi was reported to have disappeared in London in 2001; afterwards, sightings of him were reported around the world of people claiming to have met and received spiritual guidance from him. In February 2002, prior to any decision on appeals filed with the Sindh High Court, Ardeshir Cowasjee claimed in an article he wrote for Dawn newspaper, the Pakistani newspaper, that unnamed people who identified themselves to him as office-bearers of the All-Faith Spiritual Movement told him that Gohar Shahi died abroad, but this report was unconfirmed. After Shahi's disappearance, his followers largely split into two organisations: the Messiah Foundation International and the Anjuman Serfaroshan-e-Islam. RAGS International was renamed to Messiah Foundation International shortly after Shahi's disappearance. Its current leader is Younus AlGohar.

Some sources report his death as of 2001, others as of 2003. According to the Pakistani Press Foundation Shahi died in 2001 An article from 2006 in the Sunday Telegraph reports that Shahi died in 2003, and a 2009 article in Your Local Guardian also says he was reported to have died in 2003. But none of these reports are confirmed as there is no physical proof of his body. However, the Indian news agency PTI reported in 2008 that Shahi was based in the United Kingdom after being convicted of blasphemy by the Sindh High Court. This view is supported by the Indian Express which reported in 2008 that Shahi had fled to the United Kingdom and was presently based there. Zee News also supported this claim. The Hindustan Times has reported that he is "serving a life sentence". The Messiah Foundation International claims that he merely disappeared.

Shahi's family, including his wife, five sons and a daughter, still resides in Kotri. 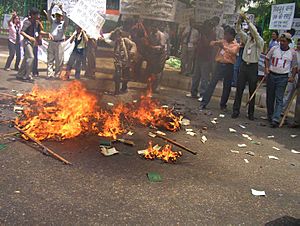 Pakistani adherents of Shahi burning their passports during a protest in India (April 2007).

The teachings of Gohar Shahi have been a source of controversy. Some orthodox theological scholars say his teachings are blasphemous, while others, such as Hisham Kabbani and Sultan-al Awliya Shaykh Mawlana as-Sayyid Khwaja Muhammad Nazim Adil al-Haqqani al-Rabbani al-Qubrusi al-Firdausi an-Naqshbandi have praised him. Hisham Kabbani also sat at the feet of Gohar Shahi.

Shahi and his followers have made claims that are opposed by some mainstream Islamic theologians in Pakistan and abroad. Shahi was accused of claiming the status of a prophet but Shahi denied such accusations. His teachings have been condemned by Muslim religious leaders and the Pakistani government.

Shahi predicts that the world would end in the year 2026 due to a comet heading towards earth. He claims the comet will be the cause of "total destruction" though mentions that "in order to intimidate [mankind]...God plans destruction on a small scale".

Many attempts were made on the lives of Shahi and Younus AlGohar, including a petrol bomb thrown into AlGohar's residence in Manchester where Shahi stayed when he toured the United Kingdom. A man tried to attack him with a hand grenade during a discourse at his home in Kotri, Pakistan. A bounty was put on his head in Pakistan.

Shahi's books have been banned by the government of Pakistan, and his followers are not allowed to meet in public. Gohar Shahi claimed to have met with Jesus in America. Shahi's supporters claim that his face became prominent on the moon, sun, nebula star and the Black Stone in Mecca, and that these appearances were signs from God that Gohar Shahi is the awaited Mehdi, Messiah, and Kalki Avatar. The alleged images induced greater legal and religious opposition. Shahi has also supported this claim, saying that God had revealed the images of Shahi on the Moon and various locations, for which Shahi himself was not responsible, and if questions should be raised, they should be raised to God. Messiah Foundation International claims the alleged images to be signs from God, pointing to Shahi being the awaited Mehdi, and quote religious texts as well as sayings from the likes of Nostradamus, and Ja'far al-Sadiq to support it.

On 18 November 1997, after appearing in court before Justice Rasheed A. Razvi of Sindh High Court Hyderabad Circuit, Shahi said, "The only justification to be Hazrat Imam Mehdi is the mark on [one's] back which can prove his existence."

Of the groups following Shahi, Messiah Foundation International claims that Shahi is the awaited Mehdi, Messiah, and Kalki Avatar while Anjuman Serfaroshan-e-Islam did not. According to MFI's website, Shahi is the Awaited Messiah, but they deny the notion that Shahi is another form of Jesus and claim that Jesus has also returned to support the Mehdi.

Gohar Shahi has authored a number of books, including one based on Sufi poetry known as Taryāq-e-Qalb, roughly translating to the "'Cure of Hearts'". One of his most prominent books is Deen-e-Ilahi (The Religion of God), which is banned in Pakistan.

Works by Gohar Shahi include:

On May 17th, 2012, Messiah Foundation International republished The Religion of God with Hay House. As of July 1st, 2012, it was #5 on the publisher's Best Seller's List.

Messiah Foundation International considers Shahi to be the author of the "Goharian Philosophy of Divine Love", a set of principles upon which the organisation is founded. Shahi has also authored a monthly magazine, Hatif-e-Mehdi, which is banned in Pakistan for allegedly containing material offensive to the religious feelings of Muslims there.

All content from Kiddle encyclopedia articles (including the article images and facts) can be freely used under Attribution-ShareAlike license, unless stated otherwise. Cite this article:
Riaz Ahmed Gohar Shahi Facts for Kids. Kiddle Encyclopedia.