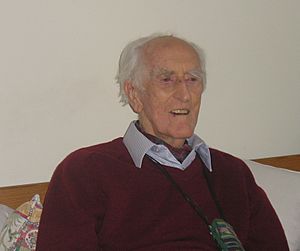 Richard Percival Lister FRSL (23 November 1914 – 1 May 2014), also known simply as R. P. Lister, was an English historian, writer, poet, artist and metallurgist. His works included The Idle Demon, The Rhyme and the Reason, Genghis Khan and The Travels of Herodotus. From 1947 until 1949, he worked in liaison for the British Non-Ferrous Metals Research Association.

Lister was born in Nottingham, Nottinghamshire. He was married twice.

All content from Kiddle encyclopedia articles (including the article images and facts) can be freely used under Attribution-ShareAlike license, unless stated otherwise. Cite this article:
Richard Percival Lister Facts for Kids. Kiddle Encyclopedia.