Richard Steven Horvitz (born July 29, 1966) is an American actor and comedian, best known for his voice work in animation and video games. His voice credits include the original Alpha 5 on Mighty Morphin Power Rangers, Power Rangers Zeo and Power Rangers Turbo, Razputin in Psychonauts, Kaos in Skylanders, Billy and his father Harold in Grim & Evil and The Grim Adventures of Billy & Mandy, Grey Matter in Ben 10, Rodney in Squirrel Boy, Daggett in The Angry Beavers, Zim in Invader Zim, Orthopox in Destroy All Humans!, the Zoni in Ratchet & Clank, Bumble in Kinectimals, the Space Weaver in Broken Age, Kanchomé in Zatch Bell!, and Moxxie in Helluva Boss.

Horvitz was born on July 29, 1966, in Los Angeles, California. His older brother, Louis J. Horvitz, is a television director and producer. 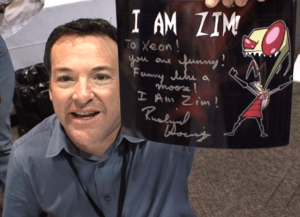 Horvitz with an autographed Invader Zim picture in May 2009

Horvitz first appeared in a 1976 Freshen Up gum commercial, which led to other commercial appearances and several hand modeling jobs. After a brief stint in an off-Broadway production of Oliver! he went on to make appearances on television series such as Kids Incorporated and Safe at Home, and films such as Summer School, How I Got into College, and Deadly Weapon. From 1988 to 1991, he starred as Howie for two seasons in the syndicated television sitcom The Munsters Today.

Starting in 1993, Horvitz changed the focus of his career to voice acting, starting with the voice of Alpha 5 in the live-action series Mighty Morphin Power Rangers. From there, he had several other voice roles in such animated series as The Angry Beavers (as Daggett), Invader Zim (as Zim), Kim Possible, Dave the Barbarian (as Ned Frischman), Zatch Bell! (as Kanchomé), The Grim Adventures of Billy & Mandy (as Billy and his father Harold), Ben 10 (as Grey Matter), Squirrel Boy (as Rodney), and Shorty McShorts' Shorts (as Dudley). He also co-wrote the Grim Adventures of Billy and Mandy episode "Keeper of the Reaper" alongside his wife Kristen Lazarian.

After his stint as Alpha 5 ended, Horvitz went on to voice a few monsters in other Power Rangers series and was also the voice of Alpha 7 in the Power Rangers Wild Force episode "Forever Red". He voiced the main characters of Raz in the Psychonauts series and Orthopox in the Destroy All Humans! series. He has also voiced various NPCs in EverQuest II, the Berserker Darklings in The Darkness, Bumble in Kinectimals, and Kaos in Skylanders: Spyro's Adventure.

Horvitz voiced "Green Grapes" in the Fruit of the Loom commercials and has acted on stage, including in Jeffrey Hatcher's Mrs. Mannerly.

In 2001, Horvitz did not create, but was in the sketch comedy group The MoHos with Fred Willard, created by his wife Mary. He and Fred would sometimes perform on various talk shows including Jimmy Kimmel Live! and The Tonight Show with Jay Leno. Horvitz also appeared in an episode of Saturday Night Live in the short segment "Bear City" and briefly appeared on Tosh.0.

Horvitz married playwright and screenwriter Kristen Lazarian on February 9, 1996. They currently live in Los Angeles and have three sons together.

All content from Kiddle encyclopedia articles (including the article images and facts) can be freely used under Attribution-ShareAlike license, unless stated otherwise. Cite this article:
Richard Steven Horvitz Facts for Kids. Kiddle Encyclopedia.