Rickreall ( RIK-ree-awl) is an unincorporated community in Polk County, Oregon, United States. For statistical purposes, the United States Census Bureau has defined Rickreall as a census-designated place (CDP). The census definition of the area may not precisely correspond to local understanding of the area with the same name. The population of the CDP was 57 at the 2000 census. Rickreall is part of the Salem Metropolitan Statistical Area. Rickreall Creek runs along the community's southern edge. 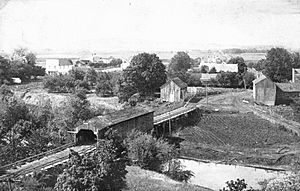 An early view of Rickreall

"Rickreal" post office was established in 1851 with Nathaniel Ford as postmaster. It was discontinued in 1857, but reestablished in 1866 with the spelling "Rickreall". Ford was again postmaster. The office has continued to operate to the present day. Rickreall was often referred to as Dixie during the Civil War and for some time after, because of the Southern sympathies of the local populace. Dixie was never the official name of the community or the post office.

According to the United States Census Bureau, the CDP has a total area of 0.2 square miles (0.52 km2), all of it land.

There were 26 households, out of which 19.2% had children under the age of 18 living with them, 57.7% were married couples living together, 7.7% had a female householder with no husband present, and 30.8% were non-families. 23.1% of all households were made up of individuals, and 11.5% had someone living alone who was 65 years of age or older. The average household size was 2.19 and the average family size was 2.56. 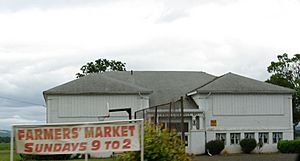 The Jefferson Institute, located a mile west of the Nathaniel Ford house, was founded in 1846; it closed sometime in the 1850s.

All content from Kiddle encyclopedia articles (including the article images and facts) can be freely used under Attribution-ShareAlike license, unless stated otherwise. Cite this article:
Rickreall, Oregon Facts for Kids. Kiddle Encyclopedia.