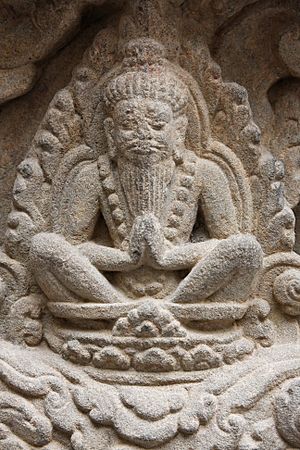 A temple relief showing a Rishi. 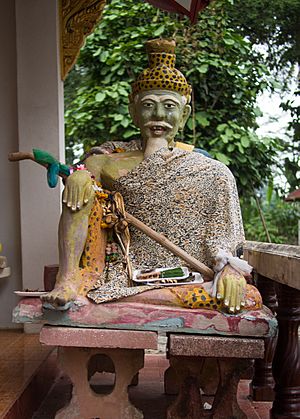 A statue of a Ruesi at Wat Suan Tan in Nan, Thailand

Rishi is a word used in many Hindu scriptures. A simple translation of the word into English would mean a sage. Hindu scriptures and Hindu mythology tell about a number of rishis. They describe a rishi as an old person, with a lot of knowledge and wisdom. They also say that some of the rishis had great powers, and sometimes even some gods of Hindus like Indra were afraid of rishis. Some of the rishis were famous for becoming angry very quickly and easily. Their anger sometimes resulted in the rishis cursing people.

Rishis used to live in deep forests. Many young men from villages and towns also lived with them as their students and disciples. Rishis taught them in schools called Gurukuls. After education, these young men returned to live with their families. However, some of them shall always remain with the rishis as their disciples. Sometimes, even kings and other members of the ruling families would go to them to seek advice and blessings. Sometimes these rishis and their disciples would go to the royal courts and participate in discussions there.

Seven such rishis were the most famous. Hindu scriptures have named them as saptarishis, that is, the seven sages. The seven sages were Kashyapa, Atri, Vashitha, Vishvamitra, Gautam, Jamdagni, and Bharadvaja. According to Hindu mythology, these seven sages had become like divine beings. Ancient astrology of Hindus identified these seven sages with the stars of the sky, the Great Bear. Their wives formed the Pleiades.

All content from Kiddle encyclopedia articles (including the article images and facts) can be freely used under Attribution-ShareAlike license, unless stated otherwise. Cite this article:
Rishi Facts for Kids. Kiddle Encyclopedia.