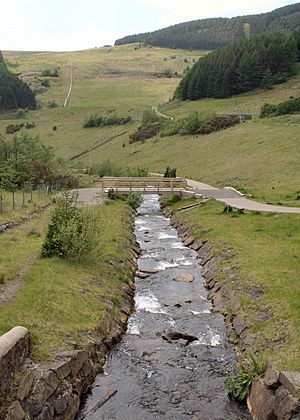 The Garw north of Blaengarw

The River Garw (Afon Garw in Welsh, meaning "rugged river") runs for about 12 miles from its source in the hills north of Blaengarw to the confluence with the River Ogmore and the River Llynfi at Aberkenfig. It is one of three main tributaries of the River Ogmore which runs through the town of Bridgend. It is in Wales, United Kingdom.

The effects of coal mining in the valley, both from small family owned shafts and major pits alike, caused the river to become polluted and dirty with coal dust and other chemicals to the point at which it was once entirely black in colour, earning it the mainly local nickname of the "Black River".

The River Garw once contained Salmon amongst other fish. Industrialisation of the valley resulted in their loss, but they are slowly being re-introduced as part of the valley's regeneration, after the closure of the coal mines in the 1980s and the recovery of the now useful shale through a brief period of restorative opencast mining in the 1990s.

It also runs through Bryngarw Country Park - a managed and publicly owned estate and nature reserve, where many types of birds can occasionally be seen.

During periods of prolonged heavy rain, the River Garw quite commonly bursts its shallow banks, causing minor flooding in all villages along its length. As the villages are mostly up on the valley sides, this doesn't have any significant effect, save for a few places; a house that once stood next to what is now a small footbridge across the river near the children's playground on the valley floor at Pantygog was demolished some years ago due to constant flooding from the river. The river has also been known to flood the playground area at Braichycymmer, and sometimes becomes hazardous near the Llangeinor playing fields/railway crossing, and in the lower regions of Bryngarw Country Park (where it has become less of a problem due to the deepening off the river bed to these ends). Its tributary streams, one of which joins at the boundary of Pontycymer and Pantygog, can turn from mere babbling brooks to raging torrents in a matter of a few minutes, and it is not unknown for this to occur very suddenly.

All content from Kiddle encyclopedia articles (including the article images and facts) can be freely used under Attribution-ShareAlike license, unless stated otherwise. Cite this article:
River Garw Facts for Kids. Kiddle Encyclopedia.