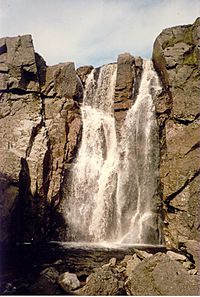 The Mahon Falls, where the river falls from the Comeragh plateau.

Falling down the 80-metre Mahon Falls and proceeding past a Hawthorn "Fairy Tree", identified by ribbons tied to its branches (the tree was chopped down and replanted), the river then passes through the village of Mahon Bridge and on past Flahavan's Mill and under the 8-arched rail bridge in Kilmacthomas. The river is joined by the Ách Mór tributary river at Ballylaneen and ends its journey three miles further downstream at Bunmahon on Ireland's south coast. It drains into the region of the Atlantic Ocean known as the Celtic Sea.

In former times, the river powered five different mills, one at Mahon Bridge, three at Kilmacthomas and one at Ballylaneen. 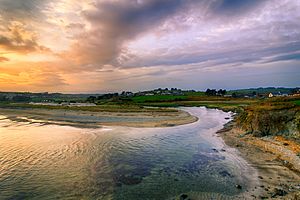 Bunmahon Beach with the River Mahon entering the sea

All content from Kiddle encyclopedia articles (including the article images and facts) can be freely used under Attribution-ShareAlike license, unless stated otherwise. Cite this article:
River Mahon Facts for Kids. Kiddle Encyclopedia.