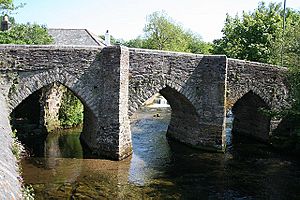 The Walkham is a river whose source is on Dartmoor, Devon, England. It rises in the wide gap between Roos Tor and Great Mis Tor and flows almost due south for approximately 3 miles (4.8 km) leaving the tors and thus National Park behind then south-west for 1 mile (1.6 km) past Woodtown. The river then reaches a village, Horrabridge, with a small compact network of streets mainly on the south or left bank. It receives most of its tributaries which are unnamed headwaters along its south-flowing inception, draining the near side of two series of six tors (peaks) to the west ending in Pew Tor at 320 metres and likewise to the east ending in Leeden Tor at 389 metres (above mean sea level). In absolute distance, 2 miles (3.2 km) west of the village and the same south of the small well-preserved town of Tavistock by a footbridge on the West Devon Way the Walkham joins the Tavy which discharges into the Tamar Estuary north of the Plymouth conurbation after a fast descent around wide hillsides, a few miles south. 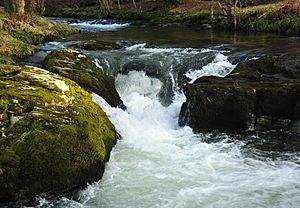 The confluence of the Walkham and Tavy is a few hundred metres downstream from the Tavistock Canal a mainly closed canal with many mining heritage centres, leading to the Tavy's near-neighbour, the River Tamar - see the Cornwall and West Devon Mining Landscape World Heritage Site.

All content from Kiddle encyclopedia articles (including the article images and facts) can be freely used under Attribution-ShareAlike license, unless stated otherwise. Cite this article:
River Walkham Facts for Kids. Kiddle Encyclopedia.