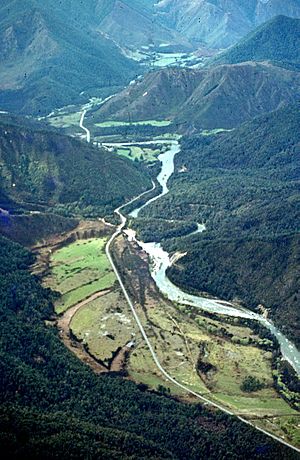 The Inangahua River in the South Island photographed in 1977

The rivers of New Zealand are used for a variety of purposes and face a number of environmental issues. Many of the rivers in the South Island are braided rivers.

Rivers in New Zealand are used for number of purposes. In the early Maori and European history of New Zealand the navigable rivers were used for transportation. There are 1,609 kilometres (1,000 mi) of navigable inland waterways; however these are no longer significant transport routes.

Rivers are used for commercial tourism and recreation activities such as rafting, canoeing, kayaking and jet-boating. Bungy jumping, pioneered as a commercial venture by a New Zealand innovator, is often done above some of the more scenic rivers.

River conservation is threatened by pollution inflows from point and non-point sources. In the past rivers had been used for pollution discharges from factories and municipal sewerage plants. With increasing environmental awareness and the passing of the Resource Management Act 1991, these sources of pollution are now less problematic. Water abstraction, especially for irrigation, is now a major threat to the character of rivers. An upsurge in conversion of land to dairy farming is stretching water resources. Also, since dairy farming is becoming more intensified in New Zealand and requires large amounts of water, the problem is therefore being exacerbated.

Acid mine drainage (AMD) from the Stockton coal mine has altered the ecology of the Mangatini Stream on the West Coast. The Stockton mine is also leaching AMD into the Waimangaroa River and the proposed Cypress Mine will increase this amount.

There is a high level of pollution in lowland rivers and streams that flow through urban or pastoral farming areas.

A report from the Ministry of Economic Development identified a large number of rivers as being suitable for hydroelectric power production. This report alarmed the Green Party and a number of environmental organisations due to the fear of an increasing loss of scenic rivers and rivers that have a high degree of natural character.

All content from Kiddle encyclopedia articles (including the article images and facts) can be freely used under Attribution-ShareAlike license, unless stated otherwise. Cite this article:
Rivers of New Zealand Facts for Kids. Kiddle Encyclopedia.