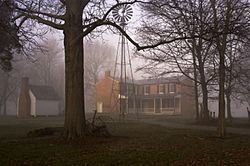 Riverside, The Farnsley–Moremen Landing is a historic 300-acre (120 ha) farm and house in south end Louisville, Kentucky, along the banks of the Ohio River. The house, a red brick I-house with a two-story Greek Revival portico, was built c. 1838 by Gabriel Farnsley.

The house was listed on the National Register of Historic Places in 1979 as Farnsley-Moremen House.

Farnsley died in 1849 without a will, and after a dozen years of legal wrangling over his estate, the ownership of the house transferred to the Moremen family in 1862. Alanson and Rachel Stith Moremen increased the size of the farm to 1,500 acres (610 ha), making it into one of the largest farms in Jefferson County before it was divided up amongst heirs in the 1880s.

From around 1820 to 1890, the property served as a river transportation hub. A riverboat landing on the property allowed people traveling by river to stop to trade goods, pick up boiler wood for fuel, or rest. The Moremen family nicknamed the landing "Soap Landing", as they sold lye soap and other household and agricultural products there. In addition, a ferry carried people and goods back and forth between the landing and Indiana.

The Moremen family held on to the property until 1988, when they sold it to Jefferson County Fiscal Court for purposes of restoration and preservation. On October 10, 1993, the restored house was debuted to the public.

A visitors center situated on the property houses an auditorium, museum exhibits and a store.

Native American hunters and gathers lived in the Ohio Valley as early as 10,000 B.C. Some of these people may have camped or hunted near what is today Riverside. About 6,000 B.C., groups of hunters and gathers established base camps. They began to take advantage of the abundant resources of the river valley such as mussels, fish, plants and larger animals in the area.

Around 1,000 to 500 A.D., these prehistoric Native American groups had become more sedentary and began to establish longer term camps. They began some agriculture in the area as a result of relying more heavily on cultivated plants and maize, in particular. This period was the introduction of pottery, the bow and arrow and larger emphasis on ritual activities.

Evidence found by archaeologist include stone tools, pottery, fire pits, storage pits, and postholes from houses. Archaeologist identified a prehistoric cemetery on the property. Which shows that people continually lived and died on the property for thousands of years.

Some of these Native American groups made contact with the first European explorers and settlers to conduct trade. By the early-nineteenth century, native peoples had all but disappeared from what is now Kentucky.

Ebenezer Christopher was the first owner of the property now known as Riverside. In 1822, Christopher purchased 200 acres (0.8 km²) thirteen miles (19 km) southwest of Louisville on the Ohio River for $2,000. He bought the land from absentee owners James D. Breckenridge and Thomas D. Carneal, who were both residents of Dinwiddle County, Virginia. Records indicate Ebenezer, his wife Polly, and their six children were already living on the farm at the time of purchase.

A structure does appear on the 1821 Ohio River navigation map, but it is unclear where this structure was in relation to the current historical house. Christopher owned the property for only four years and farmed until his death in 1826. He died in debt and the bank took over ownership of his estate.

Soon after the death of Ebenezer Christopher, the 200 acre (0.8 km²) Riverside tract was sold at public auction to Joseph Reed for $1,600. Reed owned the property for only a few months before he sold it to a southwest Jefferson County resident named Gabriel Farnsley and business partner Ebenezer Williams in 1828. In 1831, Farnsley bought out Williams' share to become its sole owner. 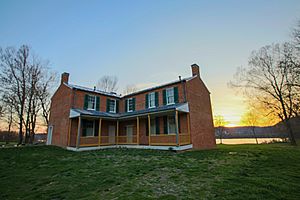 The back of the Farnsley–Moreman house in the evening.

An increase in the amount of taxes paid by Gabriel Farnsley between 1837 and 1839 indicates his impressive brick Kentucky "I" house with Greek Revival portico was constructed around this time. There is solid evidence that Farnsley was involved in the home's construction, because a brick inscribed with his signature was recovered during the renovation of the structure.

It is believed that Farnsley built the house for his bride-to-be as a wedding gift. But, as luck would have it, he was stood up at the altar. He would never marry nor have any offspring.

Gabriel Farnsley died in June 1849. He had left no will. Most Farnsley property was sold at public auction in early 1850. However, the ultimate settlement of Farnsley's estate took almost a dozen years. Soon after his death, his siblings, nieces, and nephews became embroiled in litigation over the estate. The complex series of cases involved twenty-one parties.

By 1860, the long running court battle among Farnsley's heirs was settled and the Moremen family put down roots at this farm site. The property was owned with clear title by a farmer named Megowan in 1858.

Alanson and Rachel Moremen moved upriver from Brandenburg, Kentucky bringing seven children to the fine brick house built by Gabriel Farnsley. The Moremens rented their new farm for two years, from Megowan, before they completed the purchase of the house and 200 acres (81 ha) for $15,000 cash in 1862. Their connection to the farm would last for over 125 years.

The farm at Riverside passed into the hands of the second generation of Moremens in 1886. The youngest of Alanson and Rachel's children, Israel Putnam Moremen, and his new wife Nannie Storts Moremen, were deeded the house and 200 acres of land. Israel Moremen's family continued to farm on the property. They kept chickens and hogs, and ran a dairy. Orchards produced apples and pears. The family cultivated crops of corn, pole beans, alfalfa, soy beans, potatoes, and pasture grasses. Israel, in addition, worked for eight years as the Valley Station Post Master.

The riverboat landing on the farm apparently remained operational through the first decade of the twentieth century. However, the development of the railroad, streetcar, and automobile turned the focus away from the river. Soon the Moremen family began using the original Grand Entrance as a back door to the house. In spite of this movement away from the river, it remains an important presence in the family. The riverbank was the site for picnics, family gatherings and swimming expeditions.

In 1937, the farm experienced the damaging power of the river. After days of rain, Jefferson County saw the worst flooding in recorded history. Widowed Israel was still living in the house with daughter Marjorie Collett and her family at the time. Approximately six feet of muddy Ohio River water entered the house. This was the only time the house was flooded. Fortunately, the family were able to move most of their possessions upstairs.

All content from Kiddle encyclopedia articles (including the article images and facts) can be freely used under Attribution-ShareAlike license, unless stated otherwise. Cite this article:
Riverside, The Farnsley–Moremen Landing Facts for Kids. Kiddle Encyclopedia.