From the mouth of the river, the "rivière à Mars" valley is served by the route 381 which cuts the river at La Baie, "chemin des Chutes" (north shore) and "Chemin Saint-Louis" (south shore), as well as by rail. Upstream, this valley is served by the Consol Paper road and a few other secondary forest roads for forestry and recreational tourism activities.

The surface of the Mars river is usually frozen from the beginning of December to the end of March, however the safe circulation on the ice is generally done from mid-December to mid-March.

Taking its source at the mouth of a small lake at 869 m (2,851 ft) above sea level in the Laurentides Wildlife Reserve, the "rivière à Mars" flows from south to northeast in a descent comprising several tumultuous and rugged segments. The "rivière à Mars" flows over 104.1 km (64.7 mi) with a drop of 797 m (2,615 ft) especially in the forest zone except the last segment of 10.7 km (6.6 mi) in industrial zone and urban at the end of the course, according to the following segments:

The river offers fishing for Atlantic salmon and sea trout (anadromous Saguenay brook trout). Salmon fishing is wading and fly fishing only on the most easily accessible 7 km (4.3 mi) of river.

From 1894 to 1935, the Price Brothers company operated a private fishing club on the river in Mars. In 1930, the construction of a dam limited access to salmon and allowed timber to float until 1952. Following major seeding and development work, including the creation of a fishway for salmon, the Association of sport fishermen of the Mars river was formed in 1983, and fishing reopened in 1992.

Nowadays, Contact Nature Rivière-à-Mars is a non-profit organization which manages fishing on the À Mars river and exploits the migratory pass with interpretation site of Atlantic salmon and sea trout. You can enjoy a salmon and sea trout interpretation trail, as well as a window for underwater observation of the salmon thanks to its migratory pass.

During colonization, around the 1870s, the first colonist to settle on the banks of the river was named Mars Simard, hence the origin of the name of the "Mars river". 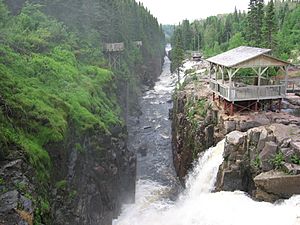 The toponym "Rivière à Mars" was formalized on December 5, 1968, at the Place Names Bank of the Commission de toponymie du Québec.

All content from Kiddle encyclopedia articles (including the article images and facts) can be freely used under Attribution-ShareAlike license, unless stated otherwise. Cite this article:
Rivière à Mars Facts for Kids. Kiddle Encyclopedia.