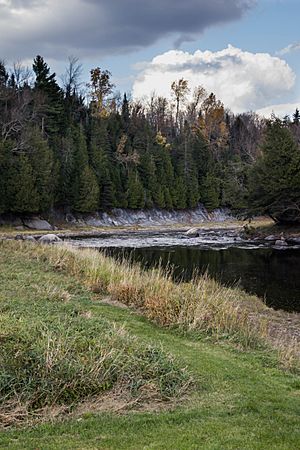 The "rivière au Saumon" near the bridge McVetty-McKenzie.

The rivière au Saumon (English: Salmon River) is a tributary of Saint-François River, flowing in administrative region of Estrie, in the province of Quebec, in Canada. The course of the river successively crosses the following municipalities:

Besides the village areas, forestry and agriculture are the main economic activities in this valley.

The surface of the Salmon River is usually frozen from mid-December to mid-March, except the rapids areas; however, safe circulation on the ice is generally from late December to early March.

The hydrographic slopes neighboring the "Rivière au Saumon" are:

The "Rivière au Saumon" is divided into two arms, the southern branch (Ditton River), near Chartierville and the eastern branch. It is subject to floods and sudden drops, submerging a large expanse of lowland that borders its banks. It was navigated by fishing boats and offered the settlers who lived on its shores a good means of transport (Rouillard, 1914). It is joined by the Ditton River near the village of La Patrie, and continues towards Scotstown, Lingwick, where it is crossed by the McVetty-McKenzie Bridge near Fontainebleau, then flows into the Saint-François River at Weedon. Its flow being more pronounced than that of the Saint-François River, many spring floods occur in this sector.

The toponym "Rivière au Saumon" was formalized on December 5, 1968, at the Commission de toponymie du Québec.

All content from Kiddle encyclopedia articles (including the article images and facts) can be freely used under Attribution-ShareAlike license, unless stated otherwise. Cite this article:
Rivière au Saumon (Le Haut-Saint-François) Facts for Kids. Kiddle Encyclopedia.