Robert Alan McDonald (born June 20, 1953) served as the eighth United States Secretary of Veterans Affairs. He is the retired chairman, president, and CEO of Procter & Gamble.

On July 29, 2014, the U.S. Senate voted 97–0 to confirm McDonald as President Barack Obama's choice to succeed General Eric Shinseki as the Secretary of Veterans Affairs, and on July 30, 2014, he was sworn into office.

McDonald was born on June 20, 1953, in Gary, Indiana, and grew up in Chicago. He graduated from the U.S. Military Academy at West Point in 1975 with a Bachelor of Science degree in Engineering. At West Point he served as the Brigade Adjutant for the Corps of Cadets and was awarded the Silver Medal from the Royal Society for the Encouragement of Arts, Manufacturing and Commerce. After graduation, he served in the U.S. Army for five years, primarily in the 82nd Airborne Division, attaining the rank of Captain, and earned an MBA from the University of Utah in 1978. Upon leaving the military he received the Meritorious Service Medal. 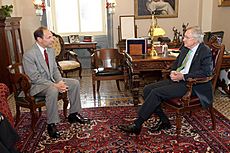 McDonald joined Procter & Gamble in 1980. He served as a brand manager for Tide from 1984–1986. In 1989 he transferred to Toronto to lead P&G's Canadian Laundry business, and moved to the Philippines as General Manager in 1991. In 1995 he became Vice President, Laundry & Cleaning Products Asia, and relocated to Japan. A year later in 1996, McDonald became President, Japan Operations, and in 1999, President, Northeast Asia. Two years later he moved to Brussels as President, Global Fabric Care and later President, Global Fabric & Home Care. He was appointed Vice Chairman, Global Operations in 2004 and appointed Chief Operating Officer in July 2007. McDonald became President and Chief Executive on July 1, 2009. He assumed the Chairman of the Board role January 1, 2010.

During his tenure, investors criticized McDonald for being too loyal to P&G traditions, being too slow to pursue layoffs and other cuts, and being unable to produce new product innovations, particularly compared to his predecessor and replacement A.G. Lafley. He resigned from P&G on June 30, 2013, following pressure from the company board and activist investors such as Bill Ackman; he was replaced by his predecessor A.G. Lafley, who returned from retirement.

In 2014 McDonald led a community-based task force to help the city of Cincinnati renovate its Museum Center. As a result of this work, the Hamilton County Commissioners added a tax levy known as Issue 8 to the ballot in the fall of 2014 which passed, adding an additional sales tax to assist in paying for the renovations.

McDonald is on the boards of RallyPoint, Quotient Technology, and Partnership for Public Service. McDonald is the founder of the McDonald Conference for Leaders of Character.

McDonald succeeded Eric Shinseki, who resigned on May 30, 2014, due to the Veterans Health Administration scandal of 2014.

Obama cited McDonald's business background with P&G and experience revitalizing organizations in his decision. Obama said, "[W]hat especially makes Bob the right choice to lead the VA now is his three decades of experience in building and managing one of the world's most recognized companies, Procter & Gamble. The VA is not a business, but it is one of our largest departments... And the workload at the VHA alone is enormous..." Obama added, "Bob is an expert at making organizations better. In his career he's taken over struggling business units... putting an end to what doesn't work; adopting the best practices that do; restructuring, introducing innovations, making operations more efficient and effective. In short, he's about delivering better results."

McDonald was approved by the United States Senate Committee on Veterans' Affairs and the full Senate by unanimous vote.

One of McDonald's first decisions in September 2014 was to increase salaries for physicians and dentists to close the pay gap with the private sector and to make VA an employer of choice. McDonald personally visited several medical schools to recruit new medical personnel in the early months of his tenure at VA. As of June 2015, VA had increased onboard staff by more 12,000 including over 1,000 physicians, 2,700 nurses, and 4,600 other select critical occupations.

McDonald opposed privatization of the VA. "I`ve never met a veteran who wants to privatize the VA," McDonald said. Privatization advocates usually have a stake in privatization, he said. The private sector couldn't absorb the 9 million veterans, with all their comorbidities, in the VA system. The VA trains 70% of the doctors in the country, and has relationships with 1,800 medical schools. Veteran's groups wanted McDonald to stay, but after a long delay, president Donald Trump replaced him with David Shulkin, who also opposed privatization, and was also replaced. 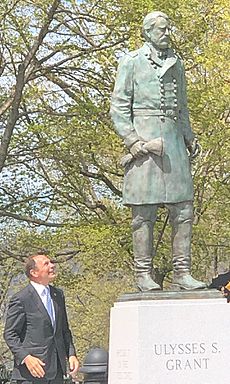 McDonald next to the Grant statue at West Point.

McDonald donated a statue of General Ulysses S. Grant that was unveiled on April 25, 2019 on The Plain at West Point.

In 2007, McDonald received the inaugural Leadership Excellence Award from the U.S. Naval Academy and Harvard Business Review. He serves on the Board of Directors of Xerox, the McKinsey Advisory Council, and the Singapore International Advisory Council of the Economic Development Board.

All content from Kiddle encyclopedia articles (including the article images and facts) can be freely used under Attribution-ShareAlike license, unless stated otherwise. Cite this article:
Bob McDonald (businessman) Facts for Kids. Kiddle Encyclopedia.