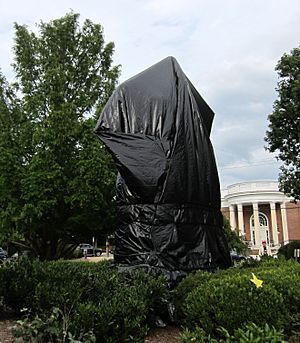 The Robert E. Lee Monument is an outdoor bronze equestrian statue of Confederate general Robert E. Lee and his horse Traveller located in Charlottesville, Virginia's Market Street Park (formerly Emancipation Park, and before that Lee Park) in the Charlottesville and Albemarle County Courthouse Historic District. The statue was commissioned in 1917 and dedicated in 1924, and in 1997 was listed on the National Register of Historic Places.

In February 2017, as part of the movement for the removal of Confederate monuments and memorials, the Charlottesville City Council voted 3-2 for the statue's removal, along with the Stonewall Jackson statue, and for the Lee Park to be renamed. The removal proposal generated controversy. A lawsuit was filed on March 20, 2017, and in May 2017 a temporary injunction for its removal granted on the basis that Virginia state law blocked the removal. White supremacists organised the Unite the Right rally for August 2017 to protest the proposed removal that drew numerous far-right groups, and during which 32-year-old Heather Heyer was murdered. On August 23, 2017, the council had the statue shrouded in black, which in February 2018 a judge ordered removed. In July 2019 a permanent injunction was granted and in July 2020 the state law was amended to remove the grounds for objection raised by the judge. As of January 2021, the injunction to the removal had still not been lifted.

All content from Kiddle encyclopedia articles (including the article images and facts) can be freely used under Attribution-ShareAlike license, unless stated otherwise. Cite this article:
Robert E. Lee Monument (Charlottesville, Virginia) Facts for Kids. Kiddle Encyclopedia.