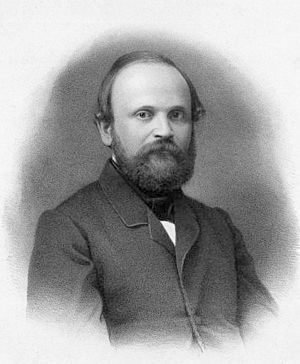 Remak obtained his medical degree from Friedrich Wilhelm University in Berlin in 1838 specializing in neurology. He worked on embryology, and also discovered unmyelinated nerve fibres and the nerve cells in the heart sometimes called Remak's ganglia. He studied under Johannes Muller at the University of Berlin.

Remak discovered that the origin of cells was by the division of pre-existing cells.

Despite his accomplishments, because of his Jewish faith he was repeatedly denied full professor status until late in life, and even then was denied the usual benefits of the position.

All content from Kiddle encyclopedia articles (including the article images and facts) can be freely used under Attribution-ShareAlike license, unless stated otherwise. Cite this article:
Robert Remak Facts for Kids. Kiddle Encyclopedia.