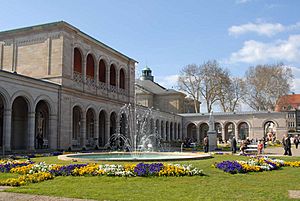 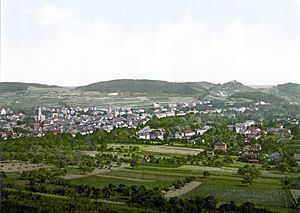 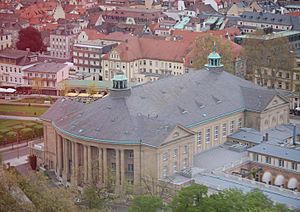 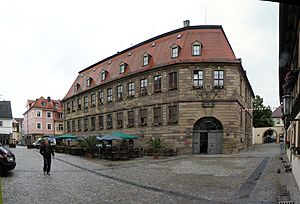 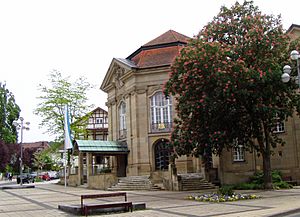 The theatre of Bad Kissingen 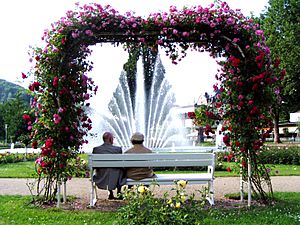 Bad Kissingen is a spa town in the Bavarian region of Lower Franconia and seat of the district Bad Kissingen. Situated to the south of the Rhön Mountains on the Franconian Saale river, it is one of the health resorts, which became famous as a "Weltbad" in the 19th century.

The town was first documented in the year 801 as chizzicha and was renowned above all for its mineral springs, which are recorded from as early as 823. Kissingen was first mentioned as "oppidum" (town) in 1279. The town developed to a spa in the 1500s and recorded its first official spa guest in 1520. Kissingen grew to be a fashionable resort in the 19th century, and was extended during the reign of Ludwig I of Bavaria. Crowned heads of state such as Empress Elisabeth of Austria, Tsar Alexander II of Russia and King Ludwig II of Bavaria, who bestowed the 'Bad' on Kissingen in 1883, were among the guests of the spa at this time. Other well-known visitors to the resort included author Leo Tolstoy and artist Adolph von Menzel.

On 10 July 1866 during the Mainfeldzug of the Austro-Prussian War, Kissingen was the site of fierce battle between Bavarian and Prussian troops, which ended with a Prussian victory.

Imperial Chancellor Otto von Bismarck visited Kissingen's spas many times, and in 1874 in the course of the Kulturkampf he survived an assassination attempt by the catholic Eduard Franz Ludwig Kullmann there. In 1877 the Kissingen Dictation (German: Kissinger Diktat) was written here, in which Bismarck explained the principles of his foreign policy. Bismarck’s former home in Kissingen is now the Bismarck Museum. In June 1911 Alfred von Kiderlen-Waechter, German Secretary of State, and the French ambassador Jules Cambon had negotiations in Bad Kissingen about Morocco without achieving a solution. The failure of the negotiations lead to the Agadir Crisis.

The resort's clientele changed in the 20th century, with ordinary people increasingly replacing nobility as guests. The spa suffered a one-year interruption in 1945, the only closure in its history.

Shortly prior to World War II Manteuffel Kaserne (Manteuffel barracks) was established at the eastern edge of the Bad Kissingen town center by the German military as part of Hitler's program to expand the German Wehrmacht. In 1945, the American military entered the town peacefully, and took over the Kaserne, which was renamed Daley Barracks in 1953. The barracks were closed in the 1990s after the fall of the iron curtain when the american troops were withdrawn.

After the war, the Department of Social Security built clinics in the town. A change in health legislation in the 1990s reduced the opportunities for contracts to fund spa visits, which led to job losses. As a result, efforts were made to attract a new kind of clientele, helped in no small part by the EMNID survey which named Bad Kissingen Germany’s best-known spa town.

In 2015, about 1.5 million overnight stays of more than 238 000 visitors were registratet in the town. With the opening of the KissSalis Therme in February 2004, Bad Kissingen gained a spa leisure centre, and in December 2004, the German-Chinese Football Academy was opened in the town, where the Chinese "08 Star Team" lived and trained in preparation for the Olympic Games in Beijing in 2008.

Bad Kissingen was one of the leading spas in the 19th and early 20th century, which in German are called "Weltbad". They differ from other spa resorts mainly through the following criteria:

Bad Kissingen and several other of these traditional spa baths want to become a UNESCO World Heritage site under the name "Great Spas of Europe".

In addition to the main town of Bad Kissingen, its districts include (with population numbers given in brackets, as of 1 January 2011):

The old town hall is a Renaissance design from 1577. The medieval chapel "Marienkapelle" was renewed and enlarged by Balthasar Neumann. Between 1838 and 1913, the arcade (Arkadenbau) was built around the spa garden by Friedrich von Gärtner, as well as the halls for the use of the mineral water ("Brunnenhalle") and for promenades ("Wandelhalle"), following a design by Max Littmann. Littmann also designed the Kurtheater (spa theatre), completed in 1905, and the concert hall Regentenbau, inauguratet in 1913. The train station building, with its Renaissance revival façade, was built in 1874 under the supervision of Friedrich Bürklein. The ruins of castle Bodenlaube from 1180 overlooks the town from above Reiterswiesen. The KissSalis Therme was opened in 2004. It is one of the largest wellness baths in Europe, and the largest building project in the town since World War II. Another point of interest is the casino in the spa park.

Other architectural sites in Bad Kissingen include:

Bad Kissingen boasts a large number of sports clubs and types of sports:

During the World Cup 2006, Bad Kissingen was home to the Ecuadorian national football team (the Croatian team was in Bad Brückenau). Sports facilities and infrastructure were upgraded for the team. 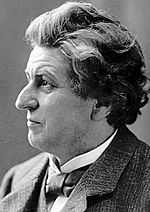 All content from Kiddle encyclopedia articles (including the article images and facts) can be freely used under Attribution-ShareAlike license, unless stated otherwise. Cite this article:
Bad Kissingen Facts for Kids. Kiddle Encyclopedia.