Robert Sidney Bowen, Jr. (October 4, 1900 – April 11, 1977) was a World War I aviator, newspaper journalist, magazine editor and author who was born in Boston, Massachusetts, and died of cancer in Honolulu, Hawaii, at the age of 76. He is best known for his boys' series books written during World War II, the Dave Dawson War Adventure Series and the Red Randall Series. He also worked under the name R. Sidney Bowen and under the pseudonym James Robert Richard.

Before becoming an author

Robert Sidney Bowen was born in Allston, Massachusetts to Robert Sidney and Catharine Sinclair (Fenton) Bowen. His grandfather, Charles F. Bowen, fought in the Fifth Massachusetts Volunteer Infantry during the American Civil War. Bowen attended the Newton High School at Newton, Massachusetts. After World War I broke out in Europe, Bowen left school to drive an ambulance for the American Field Service (AFS) in France. In May 1917, the United States Army Ambulance Service took over the AFS, and Bowen, being underage to serve, returned to the United States. When he turned seventeen, he signed up in October 1917 with the Great Britain's Royal Flying Corps in recruiting office in New York City as a Flight Cadet. He went through several phases of training, including basic military training, ground instruction, and flight instruction at Training Depot Stations (TDS), in different locations, first, at Toronto University, then at Camp Mohawk, Deseronto, Canada, at Camp Leaside, Beamsville, Canada, and at Camp Taliaferro, Fort Worth, Texas. According to The London Gazette, Bowen was granted a temporary commission as a Second Lieutenant in the Royal Air Force on June 20, 1918.

In July 1918, he went overseas to England, and was assigned to the 84th Squadron, R.A.F. fighting in France on SE5 fighter aircraft. He saw limited air combat over France but achieved no documented by the authorities victories despite claims of shooting down two enemy airplanes on the eve of the Armistice. He wrote to his family, "I reported my flight, but it was hard lines for me because I have no idea where the German planes went down and therefore they can't be credited as official... My bus has 33 bullet holes in it and three in my flying suit, which shows I was in some close action." After the end of hostilities at the Western Front, Bowen transferred to the United States Army Air Service.

After the war, Bowen began working as a journalist for the London Daily Mail, the Paris edition of the Chicago Tribune, and two Boston newspapers. For several years (until the 1930s), he was editor-in-chief of Aviation Magazine. He also worked as an editor for Flying News and several motor magazines. 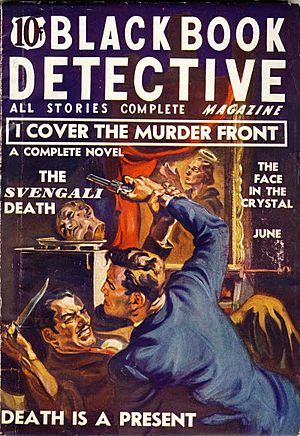 Bowen's "I Cover the Murder Front" was the lead story in the June 1937 issue of Black Book Detective.

Bowen turned to writing in 1930, using his prestige as editor-in-chief of Aviation Magazine to write Flying From The Ground Up, a non-fiction work on how to fly an airplane. He began freelancing for pulp magazines. In 1934, he headlined his own pulp magazine, Dusty Ayres And His Battle Birds, for Popular Publications. Twelve issues were released, the first ten published monthly from July 1934 through April 1935. Bowen continued writing for mystery, adventure, sports, and aviation pulp magazines through the 1950s.

After the invasion of Poland by Germany in 1939 sparked World War II, Crown Publishers called Bowen, asking for an adventure story based on the war. The Dave Dawson series , also known as the War Adventure series, was the result. Bowen got to work immediately, and the first book, Dave Dawson At Dunkirk, was published in 1941. A total of 15 volumes were released between 1941 and 1946.

By 1945 the series had sold over 2,000,000 copies. Bowen was earning 21⁄2 cents per copy sold, netting him nearly $10,000 a year. All volumes, except for the scarce final volume, were subsequently reprinted (with cheaper quality and prices) by Saalfield Publishers in Akron, Ohio.

Inspired by the success of the Dave Dawson books, Crown's competing publisher Grosset & Dunlap hired Bowen to write a similar series for them. The Red Randall series debuted in 1944, selling 200,000 copies its first year.

During this time, Bowen lived in Wilton, Connecticut, writing seven days a week, from 9 to 5, in an office that he rented over an old garage. He averaged 10,000 words per day, and could complete a novel in ten days. He also never revised his work, believing that any tampering with the story would ruin it.

After the war, Bowen turned to writing books aimed toward adolescent boys, on topics such as aviation, cars, and baseball. He also began writing books about horses under the pseudonym James Robert Richard. Most of the books he wrote during this period were published by Lothrop, Lee & Shepard. Many of his baseball books were later reprinted by Grosset & Dunlap in their series of "Famous Sports Stories." Most of his other books were published by Chilton, Whitman Publishing, Criterion.

All content from Kiddle encyclopedia articles (including the article images and facts) can be freely used under Attribution-ShareAlike license, unless stated otherwise. Cite this article:
Robert Sidney Bowen Facts for Kids. Kiddle Encyclopedia.