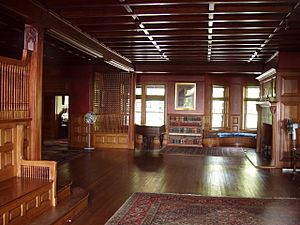 In 1866, Boston lawyer Robert Treat Paine Jr. and his wife Lydia (Lyman) commissioned architect Gridley James Fox Bryant to build a mansarded Second Empire summer house in Waltham. The house and its site were paid for by George Lyman, Lydia's father and owner of an adjacent summer residence, the Lyman Estate. This house was deemed too small for the Paines and their seven children. In October 1883, Richardson and Olmsted made their first visit to the property to discuss relocating the house and expanding it. In July 1884, Olmsted and Richardson produced sketches for a new site atop a rocky ridge with sweeping views to the southeast. In the spring of 1885, construction began while the Paine family traveled to Europe with Phillips Brooks, a family friend and pastor of Trinity Church in Boston. When Richardson died at age 47 in April 1886, the commission was close to completion. The terrace and some interior finishes were completed over the summer.

Robert Treat Paine Jr. died in 1910, and the Paine family continued to occupy the house until the mid-1960s. In 1974 Theodore Lyman Storer donated the 113-acre (46 ha) property to the city of Waltham.

Episode #2104 of This Old House featured a tour of the estate.

All content from Kiddle encyclopedia articles (including the article images and facts) can be freely used under Attribution-ShareAlike license, unless stated otherwise. Cite this article:
Robert Treat Paine Estate Facts for Kids. Kiddle Encyclopedia.