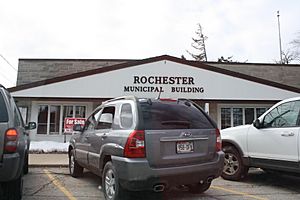 The first non-Native American settlers in Rochester were a group of five farming families, who all hailed from the town of Rochester, Vermont after which they gave their new settlement its name. These were "Yankee" settlers, that is to say they were descended from the English Puritans who settled New England during the colonial era. Correspondingly they were members of the Congregationalist Church and were staunch abolitionists. When they arrived in what is now Rochester there was nothing but dense virgin forest and wild prairie. They laid out post routes, built roads, constructed farms and government buildings all within the first few months of settling in what is now Rochester. The old Union House hotel in the Village of Rochester was a part of the Underground Railroad. The trail started there, went under the Fox River, and ended at a house on the other side.

There were 1,343 households, of which 35.6% had children under the age of 18 living with them, 67.4% were married couples living together, 7.7% had a female householder with no husband present, 4.5% had a male householder with no wife present, and 20.4% were non-families. 15.6% of all households were made up of individuals, and 5% had someone living alone who was 65 years of age or older. The average household size was 2.72 and the average family size was 3.04.

All content from Kiddle encyclopedia articles (including the article images and facts) can be freely used under Attribution-ShareAlike license, unless stated otherwise. Cite this article:
Rochester, Wisconsin Facts for Kids. Kiddle Encyclopedia.