Rohrersville is a census-designated place (CDP) in Washington County, Maryland, United States. The population was 175 at the 2010 census.

The first settlers to arrive in the vicinity of Rohrersville began to survey land tracts in the 1730s. "Park Hall," a tract of 1,550 acres, encompassing the present village of Rohrersville, was patented in 1732 by William Parks, and resurveyed in 1766 to Alexander Grimm. Also in 1766, Frederick Rohrer, a French immigrant, settled near the present village. His sons Daniel and Samuel established a grist mill which led to the formation of the village in the 1810s and 20s. The name Rohrersville first appears in 1836.

By the 1860s, Rohrersville had grown into a bustling commercial center for the surrounding farms of Pleasant Valley. A map of 1859 shows the growing number of businesses and residences in the town. In addition to the grist mill, the town also had a thriving marble industry, and a quarry was situated nearby to serve the business of William McCoy, who founded the town's most widely known institution, the Rohrersville Cornet Band, in 1837. By 1867, Rohrersville was serviced by the Washington County Branch of the Baltimore and Ohio Railroad. The rail line was started at Weverton, located at the southern end of Pleasant Valley, shortly after the Civil War, and ran through Pleasant Valley northwest to Hagerstown, where it connected to the other rail lines that converged there. The arrival of the railroad heralded a second era of prosperity for Rohrersville and many of the buildings in the village, displaying a variety of Victorian architectural styles, date to this period. 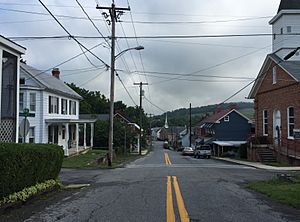 The first church in Rohrersville, a log structure open to the use of several congregations, was built in 1842 on the site of the present town cemetery. The cornerstone for the present Bethel United Methodist Church (Formerly Bethel United Brethren Church) was laid on July 24, 1871. This is the oldest house of worship standing in Rohrersville today. The former St. Mark's Lutheran Church, a brick structure built in Gothic Revival Style, was built in 1879. A second United Brethren Church was erected in the village in 1888, just down the street from Bethel Church. This congregation ceased operation in 2009 and the building has since been used by the Church of the Savior congregation. The village also had an Elementary School that operated in at least four different buildings before closing in 1978. This building is today used by the Rohrersville Ruritan Club, a community service organization, which was formed in 1952.

Kefauver Place was listed on the National Register of Historic Places in 2005.

According to the United States Census Bureau, the CDP has a total area of 0.8 square miles (2.1 km2), all of it land.

There were 61 households, out of which 29.5% had children under the age of 18 living with them, 67.2% were married couples living together, 8.2% had a female householder with no husband present, and 19.7% were non-families. 11.5% of all households were made up of individuals, and 8.2% had someone living alone who was 65 years of age or older. The average household size was 2.79 and the average family size was 3.04.

All content from Kiddle encyclopedia articles (including the article images and facts) can be freely used under Attribution-ShareAlike license, unless stated otherwise. Cite this article:
Rohrersville, Maryland Facts for Kids. Kiddle Encyclopedia.